Congratulations to Asy on becoming our 14th Battle for Azeroth Iron Man Challenge champion! Asy is no stranger to the victor’s podium, having reached it during previous expansions with other challengers at levels 90, 100, and 110. This is his first challenger to reach level 120, doing so in 38 days with a /played time of 5 days and 2 hours.

Asy’s leveling path tends to consist of the starting zone of the race he picked to play before heading out to Bloodmyst Isle. Then he returns to the Eastern Kingdoms to do some questing in Elwynn Forrest, Dun Morogh, Westfall, and a few of the early quests in Redridge. After leaving Redridge, he’s off to the Badlands and then to whatever zone he feels like heading to until reaching 60.

Once he reached 60, Asy headed to Arathi Highlands because the quests seemed to give double the XP. He also did the Plants vs. Ghouls questline. From levels 62 through 80 he worked on the quests in Borean Tundra, Howling Fjord, and Outlands Nagrand.

For levels 80 through 90, Asy did a bit of Mt. Hyjal and then most of Vashir, then to Shadowmoon Valley and Gorgrond to get from 90 to 100. At level 100, he headed over to the Broken Isles and did whatever quests he could find. To get through the last ten levels, Asy went hunting for chests, did the Plants vs. Ghouls daily, killed mobs for XP, and looked for any easy to complete quests. ” The double XP really streamlined my path, especially up to 60.”

There was one close call he remembered having. “Taming the spirit cat Gondria in Zuldrak. A rat tripped my 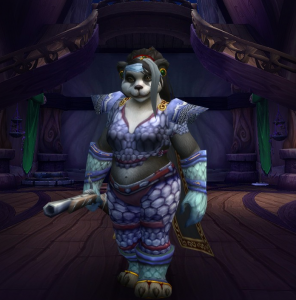 freezing trap and got down to 10% hp … new undies were bought that day” If there were any other close calls then Asy blocked them out. “Don’t recall anything really bad. A bit like giving birth once you make it you forget the pain getting there.”

Best of luck on your other challengers and congratulations once again on reaching max level and becoming our 14th Iron Man Challenge champion of Battle for Azeroth!