Beastnorn is Norn’s 3rd max level challenger of Dragonflight so far. Their others include Mightnorn and Rocknorn who were both Green Man challengers.

Norn chose to play in the Iron Man Challenge this time because “I wanted to up the challenge after completing two green man challenges but also get revenge after dying at level 61 on my monk Metalnorn.”

Beastnorn was created as a Pandaren Beast Mastery Hunter. “I did not plan for the Pandaren rested racial to benefit me as much as it did since I played this toon very on and off and parked him in inns when I was not playing, I just chose Pandaren because I like the race, they are goofy and also fairly rare in the world, and people tend to get mad when they get beat by a panda, which is always fun. And Beast Mastery Hunter was just a no brainer because it’s the safest Hunter spec to level as and also Beast Mastery Hunter is my old main, and I really enjoy the spec.”

Norn went with the following leveling path for Beastnorn: “1-60 was similar to my previous challenge runs where I’d do the starting area, in this case, the Wandering Isle, then dip my feet in Azshara, continue into the barrens, Tanaris, the start of WoD, Northern Stranglethorn, and finally the Blood Elf starting area.”

“60-70 was a lot easier this time around when you had the ability to choose where to go and not have it be streamlined. So I followed the main story questlines as far as I could before it started feeling like a death trap, and after that, I finished most side quests in every zone, but in order, it went something like the Waking Shores -> Ohn’ahran Plains, the Azure Span and finishing in Thaldraszus.”

Did Norn have any close calls while leveling Beastnorn? “I had a few, but the most 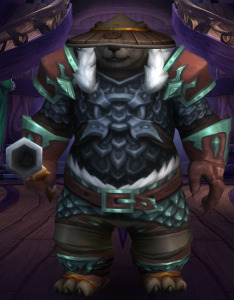 memorable one however was when I disengaged off a huge tower in the Azure Span, luckily, I planned for this and had bought goblin gliders just in case, because one of my previous toons died to fall damage in a similar way.”

Norn has the following advice for others trying out the Iron Man Challenge: “Take it easy and don’t take any unnecessary risks, and buy a few goblin gliders, just in case.”