Congratulations to Caroucell on becoming our 15th Battle for Azeroth Iron Man Challenge champion! Caroucell’s journey to max level took just 41 days with a /played time of 3 days and 2 hours. This is also Cell’s 4th max level challenger this expansion.

Caroucell’s journey to max level followed a path very similar to his Working Man challenger, Celltic. His path started to change somewhat when he entered Legion zones. Cell opted to do mostly quests with only a few Legion invasions on the side this time through until reaching level 110.

For the last 10 levels of his journey, Cell said he did approximately 50 to 75% of the available quests in Tiraguard Sound, a handful of quests in Drustvar, and zero quests in Stormsong Valley. “Stormsong Valley, in particular, struck me as dangerous.”

Once he ran out of quests he felt comfortable doing, Cell switched his focus to treasure hunting. In fact, he leveled from 117 to 120 exclusively from experience gained from looting treasures.

Were there any close calls for Caroucell? There were not any that stood out but Cell did want to remind others of this: “I found myself flying too close to horde camps in BFA quite regularly. Keep note of where those are.” 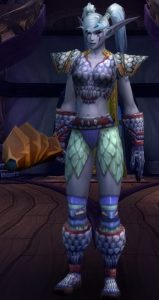 We asked Cell if he had any advice he’d like to give other Iron Man challengers and he had this to say, “I would hoard the rest xp. There isn’t a lot of xp available to Irons in BFA because it is gated behind the Heart of Azeroth quest, so milk every last drop.”

Congratulation once again to Cell for reaching max level with Caroucell and becoming our 15th Battle for Azeroth Iron Man Challenge champion.