This character was born in June of 2016 during Warlords of Draenor and is the second Rogue to make it to max level as an Iron Man in Shadowlands. Caster’s /played time is 20 days, which is due to the long trek to max levels of 100, 110, 120, and now 60 over the years.

Did Ster handle Catster’s path to level 60 any differently from his other max level irons? “I really wanted to see if picking a different covenant from Night Fae made a difference. So this time I picked Necrolord, hoping that the Fleshcraft Shield and the Serrated Bone Spike would assist in fighting. Turns out, nope, the rogue just is not strong enough to kill mobs in Shadowlands, even with these additions.”

Since Iron Rogues seem to be a bit more delicate when it comes to getting through the zones in Shadowlands, how did Ster safely get from level 50 to 60? “It only took about a month of playing to go from 50 to 60. A Rogue’s best abilities are to sneak around and crowd control mobs. That means it is super easy to go to daily world quests scattered around SL and complete those dailies. Often a wave of other players will clear an area – rogue just simply stealths in, grab the objects needed for the quest, and sneak off. The druid can do this too to some degree, plus the ability to root-n-shoot mobs is an advantage over the rogue.” 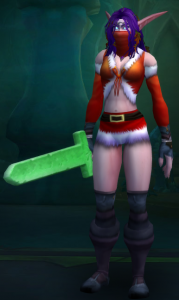 What’s next for Ster? “I’m currently working on a Monk (mistweaver spec) which is much harder because really, no sneaking around, no SAP, no ability to kill anything in SL. But she’s made it to 58 so far, which means really, all classes have a chance to hit max level in the challenge.”

Good luck with your Iron Monk and congratulations on becoming our 7th Shadowlands Iron champion with Catster!