Congratulations to Contester on reaching max level and becoming our 22nd Battle for Azeroth Iron Man Challenge champion! It took Ster 105 days with a /played time of 7 days, and 12 hours to reach level 120 with Contester. This is Ster’s 6th max level challenger. He has reached max level so far this expansion with a Working Man, two other Irons, and two Tins.

Contester started out as part of the Survival of the Fittest Iron Hunter leveling contest in which she placed 6th. After the contest was over and Survival spec was no longer required, Ster switched her over to Beast Master spec, which seems to be the preferred leveling spec for many Iron Hunters.

This was Ster’s first-ever Hunter leveling experience. When we asked him what made it easy or difficult he had this to say: “Playing a hunter is not as easy as you’d think. Having a pet is great, but soooo many spells/actions that it feels like you have to micro-manage the toon to fight or coordinate the pet. So I ended up keeping the pet dismissed most the time because, within the last 3 expansions, it’s very difficult to kill anything. I also got rid of most actions, my action bar had Freeze Trap, Feign Death, and a couple of shots. Much easier! I certainly salute those players who are leveling machines with a hunter.”

We also asked Ster what the best and worst part of leveling an Iron Hunter was: “The pet can be pretty decent, especially if you get a spirit pet like the spirit bear. At least up till WoD, you can pretty much just point at an NPC and say die – the pet does all the work. Feign Death is pretty handy, but damn, I hate the death scream my toon would make each time I used it.”

Did Ster have any as he likes to call them “need to change his armor” moments while leveling Contester? “Oh yeah, you know you’re playing a Hunter when you’re trying to kill a single Legion or BfA mob, and during the fight, your pet dies, the NPC comes after you, freeze trap the NPC, toss a rez to the dead pet, heal up, resume the fight and prevail. Holy crap 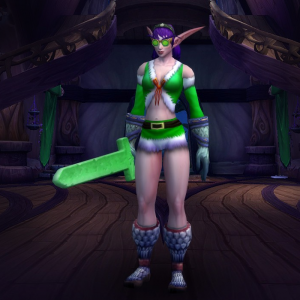 had to take a 5-minute breather after that.”

What’s next for Ster? Well, he does like to keep busy… “Trying to get a Pacifist over 100, but keep killing them off. Paci’s are just as fragile as Level 1 critters with a Fel Reaver dancing around ‘em…”

Best of luck on your Pacifist journey Ster, we’ll be rooting for you!

Congratulations once again on reaching max level with Contester and becoming our 22ng Battle for Azeroth Iron Man Challenge champion!