Congratulations to Contester on becoming our 2nd Battle for Azeroth Working Man Challenge champion! This was Ster’s first attempt at the Working Man Challenge. If you couldn’t tell by the name, Contestster came to be during the Winter’s Veil Helpers Working Man leveling contest back in December of 2019. Even though the contest ended Ster kept chipping away at the levels working his fingers to the bone to reach max level in 95 days. “I tip my hat to Execute, who blazed the way with the first 120 in Working Man, and in less than 2 weeks. Sadly, it took me about 3 months, with a /played of 11 days and 8 hours.”

When asked about how his overall leveling experience went with his Working Man challenger Ster had this to say: “Since Working Man is Iron Man rules with professions, I took advantage of mining, herbing, and archeology. The mining/herbing helps out with gold and points in the 1-60 levels, while archy really helped in the 80-120 levels for XP.”

His scariest moment while leveling came when taking a taxi ride from Dalaran to Sholazar Basin. As he flew over Wintergrasp a battle just happened to be in progress. Mid-flight he was put inside the fortress in Wintergrasp and found himself PvP flagged. “Fortunately I hearthed out, but I may have soiled my armor. Lesson learned: always have hearth ready, even for a taxi ride.” 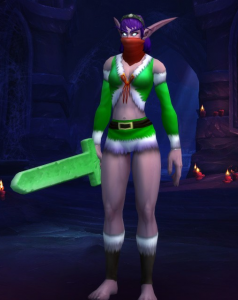 Ster’s best advice for those wanting to try out the Working Man Challenge? “You’re still an Iron Man, just as vulnerable, play conservatively and cautiously.”

Inquiring minds want to know, what’s next for Ster? “I’m determined to get a druid ironman to 120, so working on Kittyster – she’s almost 80.”

Once again, congratulations Ster on getting Contestster to max level and becoming our 2nd Battle for Azeroth Working Man Challenge champion!