Downinfront is Nisey’s 2nd Pacifist Shadowlands Champion and her 9th Champion overall for shadowlands so far, with the rest being Blood Thirsty Champions.

Nisey says this Challenger was created for the Pacifist Leveling Contest that happened during the Battle for Azeroth expansion. She says “I had leveled another Pacifist previously so I knew what I was getting myself into with this Challenge so when the contest was announced I figured, sure let’s give it a go. Downinfront was actually my second attempt at the contest. My first entry Justaweebit died at level 62. Somehow I was able to get this one leveled up to 45 just as the contest was ending and made it into tenth place.”

When asked about the race/class she chose, Nisey says “So since this character was created for a Leveling Contest there were some restrictions in place already. A lot of people were going Night Elf and since I wanted to go with a less used race I went with Gnome. I think I was the only person to do so going by the stats for that contest. For class, I chose to go with Hunter because no one else had for the contest and I couldn’t ever remember anyone picking the Hunter class for their Pacifist challengers before. Plus I figured if I got into trouble maybe Feign Death would help. Spec didn’t really matter for me since I wasn’t able to kill anything for this challenge so I think I just stayed with whatever Default Spec I was given. Now I think Hunters may have started out with a pet from level 1 at that time so I did make it a point to dismiss my pet as soon as I had the ability to do so to make sure they didn’t bring any unwanted trouble.”

What path did Nisey choose for leveling Downinfront? Nisey states “Before I get started with this part it should be noted that this character has been hanging around for a good amount of time. He got caught up in the great level squish so my explanation of my leveling path may not match exactly to what his level was and where I was at during the contest. Earlier I had said I went with Gnome because no one else had yet and I wanted to be different but there was another reason. The Gnome starting area had ore and flower nodes. I don’t believe any of the other races available had gathering nodes in their starting area. So I stayed there and ventured out into Dun Morogh as I gained some levels. At some point, I left there and headed up to Western Plaguelands. I had the Flight Plan Toy so getting up there wasn’t so bad. I think I flew into The Hinterlands and then took the road around into Chillwind in Western Plaguelands. And there I stayed until (the new) level 30, running laps around the lake picking flowers well, picking Liferoot. I didn’t bother with the Swift Thistle since that was underwater and would have taken more time to go get. There was also a good amount of Iron Ore nodes with some Gold nodes thrown in here and there over time. At 30 the XP gains from those nodes dropped way off which was not ideal for me. I thought let’s head to Northrend and get some Saronite and such but after I got there I just wasn’t feeling it so I went back to Stormwind and for the first time ever on one of my challengers I invoked 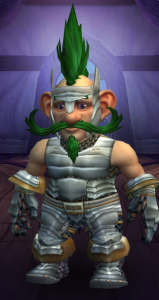 Chromie Time and headed back to Western Plaguelands. With Cromie Time turned on the XP from the gathering nodes out there came back up and allowed me to stay there till 50. I wasn’t gathering from nodes that brought a lot of money in from AH on my server but it was much safer. You don’t really run into many people at all on my server around that lake. I also went to the Darkmoon Faire when I remembered to in order to do the profession quests that were available. At level 50 it was time to do The Maw skip quest and enter Shadowlands. I took the world quest option from the Threads of Fate quest and headed off to Bastion. I did not pick a covenant. I really didn’t see the need to since I was not planning on doing any quests in the Shadowlands zones. I had a pretty good idea of what gathering nodes were somewhat safe due to spending so much time out there on my Blood Thirsty challengers. So that’s what I did, I spent the next ten levels gathering away. I’m sure my Hunter had all sorts of blisters on his hands from all the mining and flower picking he did. I did record his level 50 to 60 leveling experience and that is up on my YouTube channel.”

Did Nisey have any close calls? She says “Yes, yes I did. I had a scare happen while in Western Plaguelands. I found out the hard way that a gargoyle patrols pretty close to the route I was running on the Eastern Plaguelands side of the lake. I guess I was just close enough to aggro him and I do remember running a fair distance and then Feigned Death. After that, he finally leashed back to where he came from. That was certainly a lesson learned and now I’m on the look out for him and have shown others where he shows up at during a few of my livestreams.”

Nisey offers up this advice for playing a Pacifist “Make sure to scout out the quests you are unsure of. You never know when a quest that looks safe enough could give you kill credit. Try not to play during peak player times. We don’t fully know what triggers prox kills but we do know they can happen so the fewer people around you the better off you’ll be. Don’t be afraid to ask the others that have become Pacifist champions how they leveled. Maybe a combination of several different strategies could work for you.”
Nisey is currently working on a few more Blood Thirsty Challengers. She has 5 classes remaining to complete her goal of every class to max in that challenge.
Congratulations again Nisey on becoming our 16th Shadowlands Pacifist Champion with Downinfront and best of luck on your Shadowlands Challenge leveling.
Cancel
In order to add your character you must meet these criteria: