Congratulations to Ferreskyye on becoming our 9th Battle for Azeroth Pacifist Challenge champion!

Ferreskyye reached max level with a /played time of 7 days and 23 hours. This is Ferre’s 3rd Pacifist to reach level 120 and her second Rogue. “She was intended to be a replacement for a mage pacifist who met an untimely demise, but apparently my finger slipped on the create screen and by the time I realized it, she was in game insisting that she was in-fact a ROGUE. Can’t argue with that kind of determination.”

Ferre started doing a serious amount of Archeology with Ferreskyye around level 90 when her Working Man challenger was almost to max level. “I found it a little unsettling to switch between Pacifist and Working Man on dig sites – you kind of get used to being able to just eliminate that annoying mob near the node on the Working Man.”

“Her greatest challenges were the distressing tendency to get lag spikes and disconnects…had some pretty close calls on those. I 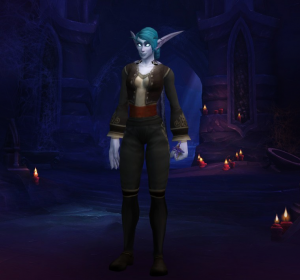 think she’s the first character I’ve ever had who dinged max level by doing a cooking or fishing daily, but with a block to go, I wasn’t willing to risk travel to another dig site.”

What’s next for Ferre? Well, she is always keeping busy with a multitude of characters across several different challenges. We hope to see her reach max level with another character soon.

Once again, congratulations to Ferre on reaching max level with Ferreskyye and becoming our 9th Pacifist Challenge champion of Battle for Azeroth!