Ferre chose the Working Man Challenge this time out because she really loves it. “It’s the best of both the Iron Man and Pacifist challenges! I love quests AND professions.”

Ferrewynter was created as a Night Elf Resto Druid. “She actually started as balance until her mid teens but switched to resto when she started doing more gathering activities than kill-quests. Biggest factor – I like having a heal over time spell (Rejuvenation) rather than a slow heal.”

Ferre went with the following leveling path for Ferrewynter: “She started off like an Iron Man Balance Druid but added professions as soon as possible for extra experience from gathering and the cooking/fishing dailies. When killing mobs got slow, she switched to Resto and focussed on profession activities and non-violent quests along with exploration and holiday activities. She also did quite a bit of archeology in old-world zones. My favorite gathering spot is at Dreamer’s Rest in Feralas great for herbs and mining. As a Druid, her crowd control isn’t good, so she generally skipped areas where she’d run into mobs.”

“At 50, she did the Maw skip and took Threads of Fate, joining the Night Fae. From 50-60, she did a combination of World Quests, Profession World Quests, Cook/Fish dailies back in SW, holidays, and DMF activities as well as limited herbing in Bastion and Ardenweald. She dropped mining prior to going to SL zones, picking up Alchemy to take advantage of the SL profession WQs. It doesn’t take many herbs (gathered or purchased) to get to level 25 in SL Alchemy to open the WQs. I don’t particularly like mining in SL zones, so it was a good alternative with safe sites for the WQs.”

Did Ferre have any close calls while leveling Ferrewynter? “Not really. Nothing that Shadowmeld didn’t take care of.”

Ferre has the following advice for others trying out the Working Man Challenge: “Play a class and spec 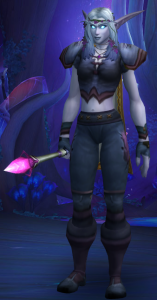 that you enjoy! Do as much questing (including kill quests) as you like and are comfortable with. But gathering, especially when you have rested, provides some very fast experience if you have a good route. In SL, supplement the doable WQs with old-world cooking/fishing dailies and of course the DMF profession monthly quests!”

What’s next for Ferre? Will she be taking a break or will she be hopping back into the fray with another challenger? Ferre tells us that she has a few more Pacifist and Green Man challengers in the works, so we’ll be sure to keep our eyes open for them!

Good luck with your other challengers Ferre, and congratulations once again on Ferrewynter becoming our 6th Shadowlands Working Man Challenge champion!