Congratulations to Ferriona on becoming our 20th Shadowlands Iron Man Challenge champion! Ferriona’s Iron Man journey overall has taken 3,020 days with a /played time of 55 days, 13 hours, and 46 minutes. This challenger had previously made it to 120 which brings her Shadowlands /played time to 18 days, 14 hours, and 26 minutes.

Ferriona is Ferre’s oldest Iron Man challenger. Having reached max level in MoP, Legion, and BfA she felt it was time to try to get Ferriona to max level for Shadowlands.

Ferre took the following leveling path with Ferriona: “This character was created during MOP and hit max level during that expansion and subsequent ones as current content.”

“It became apparent in the Legion expansion, that Ferriona was going to have little success at killing Legion mobs. I tried all four Druid specs and settled on Resto as her best shot at staying alive past WoD content. (I have a Resto Druid ‘main’ and quested with her in Legion.)”

“Normally, she would do quest content from the previous expansion, but when it came to BFA, the exp from Legion mobs dropped off so precipitously that the risk/reward was pretty unappealing after a couple of levels past 110.  I scouted pretty intensively on a 111 Druid in BFA, but it was very discouraging.”

“So, her path to 120 did not involve killing mobs in BFA. I call it the slow road, making use of dailies and holiday activities with limited exploration. Druid crowd control is pretty weak and after some close calls, I really wished for a Vanish-type spell beside Shadowmeld.”

After such a long Iron Man journey, Ferre chose to keep Ferriona on a “slow road” to max level.

“At the beginning of the SL expansion, I was completely unsure if I would ever manage to unlock Threads of Fate for my characters since I so seldom played any regular toons – never even got flying in BFA and just one regular barely to 120. “

“I didn’t want that to prevent Ferriona from getting to 60, so I started off on the path she took – which consisted of experience from chests and holiday quests (which were very minimal exp until midsummer when Blizzard reverted the exp nerf to lvl 50+ characters in holiday quests).”

“As it happened, a long-time friend duo’d with me to help my regular Druid get thru the quests and hit 60, unlocking Threads. At that point, Ferriona was already several levels along. I made the choice to continue on that path, and someone in a podcast chat dubbed her as ‘Threadbare’ – which I thought was a good term. (Being a Druid, she could have been a Threadbare bear, but honestly, she was Resto spec).”

“Since I don’t have flight in BFA, and am not comfortable with Druid crowd control on the ground (or lack of it), I didn’t do any chest hunting in BFA zones. I did pick up some exploration points there and in Legion zones.  She had nearly completed the Midsummer fires before Blizz changed the experience for lvl 50+. I think she only got the benefit of that for Legion and BFA fires.”

Were there any close calls while leveling Ferriona? “No, not really. There were some latency/disconnect occurrences, but fortunately nothing really dangerous.”

Ferre has the following advice for those thinking of trying out the Iron Man Challenge: “Make use of all avenues of experience open to you. I don’t really suggest that this slow road is something most people would want to do, but adding in the elements of it to the ‘waiting for doable WQ’s’ method might speed up the overall process. Mostly, play in a style and pace that is comfortable for YOU.”

What’s next for Ferre? Well, it looks like Ferre isn’t ready to take a break just 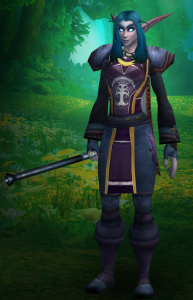 yet as she likes to keep busy working on various challengers. “I have an Iron Man Druid and Rogue at lvl 51 and an Iron Hunter at 50. But I need to scout thru the Maw again since it has changed since the last time I was there. My lvl 54 Mage Pacifist (and a Rogue and a Druid paci) are taking their time with leveling (on rested only). And then there is my Tauren Druid pacifist… But she’s not lvl 10 yet.”

Good luck with your other challengers Ferre and once again congrats on Ferriona becoming our 20th Shadowlands Iron champion!