Illtakecare is Dave’s second challenger to reach max level during Shadowlands. “…first was 8 days ago. For years time and time again it was this that or the other thing. Talents, I tell you it is the talents.”

Dave chose to play the Green Man Challenge because he was just looking for that edge. “Between Green gear and talents it can create a formidable challenger.”

Illtakecare was created as a Human Protection Paladin. “Since the 4th of October I have started I believe 24 separate toons, between Hunters, Paladins, and a few Mages. I really learned quite a bit on this one building through the talents really gave me the ability to tailor to survival. Makes a huge difference, some fights drag on but nowhere near as many close calls. At any rate, Human/Paladin! No good reason other than familiarity with the planned route for leveling is quite convenient in the Eastern Kingdoms.”

Dave used the same leveling path for Illtakecare as he used for Mebee but here it is again in case you missed it previously: “Northshire Abbey through Level 6; Elwynn Forest through Level 16 stopping in Stormwind to launch the Legion expansion (for the Dalaran Hearthstone); a few city quests and stopping in the Dwarven District to start up Chromie time (for Wrath expansion) ready to head out for Northrend as necessary to continue leveling.”

“But Northrend was not in the books, Westfall completed all questlines. Deadridge, all quests up to setting the Seaforium Charges, NOPE, ain’t going into them guarded buildings. Duskwood, all questlines completed. STV Quests up to the point where you start chasing down them damn Trolls, sorry hordies but I lost too many and too recent to them damn TROLLS.”

“Onto Dun Morogh and Kharanos no problems there. Just gives me the “willy’s” every time you get into that transporter thing. Loch Modan and the “Valley of Kings” never really ever had problems there which brings us to the Wetlands where I finished up in Menethil Harbor.”

Did Dave have any close calls while leveling Illtakecare? “Level 32, while in the catacombs beneath Raven Hill, Duskwood, the server unexpectedly died. For 30 minutes could not log on, continuously attempted to log on, once I returned I was surprised to not be dead but was immediately attacked by 3 mobs. Tell me they weren’t waiting for me. Bubble hearth for the win, was not gonna wait and see how the fight would go.”

“Yesterday, I was distracted by parental functions and then noticed that I was being attacked, luckily it was an area where I had a strong resistance to the attacks I was receiving and just cleaned up and finished the fight. Earlier today, I had a package delivery, got up, and went and got them without logging…yeah how dumb was that… There were a couple of other spots where I did a “Bubble/Hearth” just to be on the safe side.”

Dave has the following advice for others trying out the Green Man Challenge: “As I 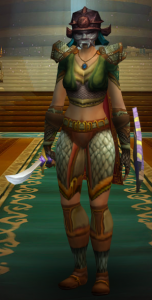 once said as a guest on the podcast, “DON’T DO IT” it will consume you; you will become obsessed; you will never be able to quit; Just say no to the “WoW Iron Man Challenge”! LOL, Just Kidding! Just remember there is a thing called “The real world” out there and it can be pretty amazing when you let it!”

What’s next for Dave? Will he be taking a break or trying to squeeze in another challenge champion before Dragonflight arrives? “I have 2 remaining of the 21 started since the 4th of October but I think I will let them languish as they are both classes I have now completed. That leaves no immediate plans other than smoking a turkey for Thanksgiving tomorrow. I had a plan to limit my play on this toon to 5 levels per day after I hit level 30, didn’t work out quite that way…leaves more time for Turkey. Have a Happy Thanksgiving all!”

We hope you have a great time when Dragonflight arrives no matter what you end up doing! Congratulations again on Illtakecare becoming our 13th Green Man Challenge champion of Shadowlands!