Congratulations to Innocence on becoming our 19th Battle for Azeroth Pacifist Challenge champion! It took Lyssan 125 days and 19 hours with a /played time of 4 days and 11 hours to reach max level with Innocence.

Why did Lyssan choose the Pacifist Challenge this time? Well…: “I was curious to see if a pure pacifist (no profession pacifist) can make it to max with the help of the double exp buff – I tried it before and it was nearly impossible after level 20.”

Attempting a Pacifist without professions comes with a rather altered leveling path compared to those with professions. So how did Lyssan go about leveling Innocence? “Doing all the quests I could find (1 – 60), more quests plus some treasure chests in Northrend (60 – 80), mostly treasures exp from 80 – 120 (Pandaria, Draenor, and BFA – Legion skipped almost completely).”

Did Lyssan have any during his journey with Innocence? “No, it was pretty chill – I used Shadowmeld a couple of times to reset aggro in order to avoid an unwanted kill by some other player.”

Lyssan has the following advice for those who want to try out the Pacifist Challenge: “For classical pacifist – be patient, do the profession dailies, have Netflix running on a second monitor :). For a pure pacifist – much more involved, do a lot of quest research 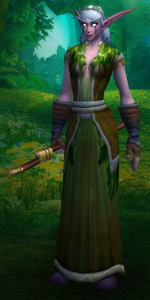 using alts to see if a quest is doable before trying it, prepare to do a lot of travel to look for respawning experience (treasure chests) which in later content is the main source of experience.”

Lyssan plans on taking a bit of break until Shadowlands launches, where he plans to partake in some normal play for a while.

Best of luck Lyssan wherever your journey takes you and enjoy your break, you’ve more than earned one! Once again congratulations on becoming our 19th Battle for Azeroth Pacifist champion with Innocence!