Congratulations to Ironbrue on becoming our 23rd Shadowlands Iron Man Challenge champion! Ironbrue’s journey took just under 44 days with a /played time of 2 days and 22 hours.

“This was my first retail max level, but also max leveled a Classic Ironman a good while ago, but I think you are still not tracking Classic. I have tried many times, mainly on hunters with varying success, highest were 112 (back when it was 120), and lately, 55 and 57 when death ended those challenges. I Chose to play purely for the challenge and found it becomes rather addictive.”

We know leveling paths can vary quite a bit depending on playstyle as well as evolve as we discover what is possible for our challengers to complete and what is not. Ironbrue used the following path: “On Ironbrue, as I recall…I did the whole human starting zone, (chose BM hunter) and did quests around Goldshire, on to Westfall (completed), then Lakeshire, and onto Duskwood. Then did Stranglethorn down to Booty Bay (completed – that last battle in Booty Bay is an adrenaline pumper!)”

“I think I could then fly, so moved on to Northrend and quested to L39 so I could tame the three spirit beasts there for the fun, Loque’nahak, Arcturis, and Gondria. Used Loque as pet from then on. Did some quests in Borean Tundra, most in Sholazar Basin, some in Icecrown, and a few in Storm Peaks and Grizzly Hills. I reckon I was mid 40s when I went off and grabbed as much XP as possible from exploring and picking up chests around Kul Tiras and Zandalar. I kept doing odd quests and exploring to L51 and headed for Shadowlands.”

“The Shadowlands intro is not too bad but needs some care when you are running to the cave with Jaina. At the end, of course, I chose to level on world quests, etc, and chose Night Fae covenant (my main is Night Fae so was familiar). Later it was obvious that Necrolords is the best covenant for Iron because of the shield – which can be a real lifesaver giving you time to think. So I changed around L56. I then basically leveled on world quests, but also did quite a few fairly easy quests that are near flight paths. Plus the repeatable (weekly) mixing ingredients ordinary quest in Maldraxus (often done at the same time as the equivalent world quest for a nice exp bonus). The bonus quest nearby to save the plague victims is not too hard also. (Previously I had lost my Iron Man when the Gormageddon quest changed and I did not realize. I was whacking gorms as a cat and suddenly saw the ‘you have died message’. Head in hands time again.)”

Did Ironbrue have any close calls while on their Iron Man journey? “Too many close calls to mention. Keeping pet alive at higher levels can be a real challenge. Much use was made of FD. Most problems were fighting a mob and another spawns right under you.”

Ironbrue has the following advice for those wanting to try out the Iron Man Challenge: “Go for it, it is great fun, rollercoaster ride of adrenaline-pumping, heart-stopping moments. Be prepared to die – often – nearly always stupid and avoidable. It is a time when you will scrape your soul for the worst swear word you can find to scream at the screen. Dust yourself off, learn by your mistake, and start again. It is still fun.” 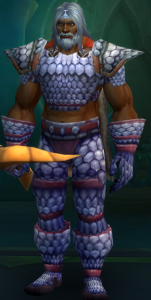 What’s next? Is it time to take a break or will Ironbrue’s pilot be jumping back into the fun? “Saw the leveling guide for Shadowlands Rogue, so started one this week. Got stuck at Quakefist – decided after quite a few attempts (during which I shamelessly ran away as my health plummeted) it was too risky so went back to my usual routes above. Here though, I stopped my Westfall run at the four thugs behind the barn (Quest: Lou’s Parting Thoughts). Easy enough on a Hunter, but I thought four would be quite a handful for this white-geared Rogue. Perhaps that guide should add that as an Outlaw Rogue you need a sword in the main hand for Dispatch to work. It would not work with the white vendor daggers I had, it said I needed a one-handed melee weapon. Not sure why, but the dagger would not work.”
“At L22 now, so get Vanish, the ‘get out of jail free card’ next level – works similar to Hunter Feign Death I guess – looking forward to having that up my sleeve.”

Best of luck on your Rogue’s run and congratulations once again on becoming our 23rd Shadowlands Iron Man champion!