Congratulations to Jangpaci on reaching max level and becoming our 8th Shadowlands Pacifist Challenge champion! Jangpaci’s journey took 59 days and 15 hours with a /played time of 2 days, 2 hours, and 41 minutes.

Jangpaci is Janglur’s second challenger to reach max level during Shadowlands. His other max level Janglurc was an Iron challenger.

Janglur picked the Pacifist Challenge this time as he wanted to bring his past Pacifist champion up to the new max level. Sadly that challenger plus a replacement one both fell victim to an Outlaw spec passive ability called Mastery: Main Gauche. A mob near him somehow trigger the ability which caused him to be yellow flagged due to a kill and killing blow. This would not do and Janglur was on a mission to get a Shadowlands max Pacifist and he refused to give up until he got it.

Pacifists are not allowed to kill mobs but they are allowed to delve into the world of professions. The Shadowlands feature of Chromie Time also seems to have opened up more quests that Pacifists can do. At least Janglur seemed to find a good number of paci safe quests. “In Shadowlands you can do a lot more of your leveling via quests than you could before. I do my 1-50 profs in Elwynn Forest. Brewfest was also helpful.”

Did Janglur have a favorite and a not so favorite zone while leveling Jangpaci? “Elwynn Forest for herbs and mining. I don’t think I have a least favorite for pacis.” 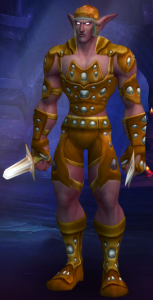 While leveling Jangpaci were there any close calls? “No close calls per se. The biggest challenge is not accidentally clicking on a low-level mob while doing arch from 51-60.”

Janglur has the following advice for his fellow Pacifist challengers: “Left-click everything.”

What’s next for Janglur? Will he be taking a break or is he working on another challenger? “I’m two bars away from maxing another Iron.”

Best of luck with your Iron challenger Janglur and congratulations on becoming our 8th Shadowlands Pacifist Challenge champion with Jangpaci!