Nisey plays the Blood Thirsty Challenge because “I find the Iron Man Challenge a bit stressful and while I have played a Pacifist before at times it can be a bit too passive for me. Blood Thirsty was just a better fit for me and I’d rather pick the mob that may kill my character instead of a quest picking it for me.”

Nisey says “This character has been around for a bit of time. She hit level 10 back in early 2019. In her early existence, I was taking her through level appropriate zones as she progressed. As it’s been a bit of time I don’t remember the exact path she took early on. Just before level squish came in I do remember she had been grinding in Ice Crown. 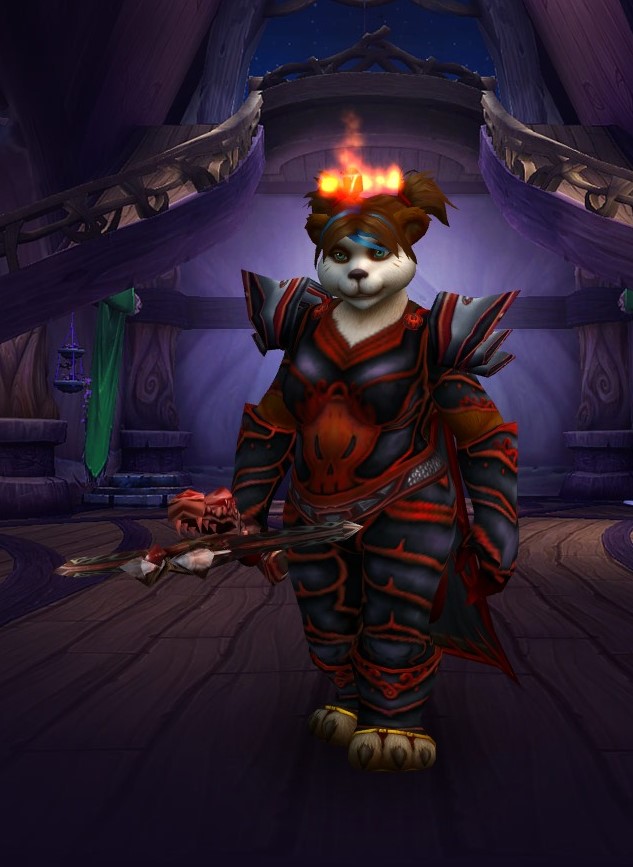 After the level squish came in and zone levels were rearranged, we gained a bit more freedom of movement. Tiragarde Sound’s level range was changed to 10 – 50 so when she reached level 33 I decided to just take her into Tiragarde early and settle in as I knew I could make a bit of money off the vendor trash there. That’s where I stayed from level 33 to 50. At 50 I took her through The Maw and into Bastion without incident. Level 51 through 53 I did some laps around Aspirant’s Rest. At level 54 I moved over towards Hero’s Rest and was doing laps near there. At 57 I moved over to Sagehaven and was doing laps back there killing turtles until level 59. At level 59 one of the leather farmers on my server kept swooping in and killing a good number of the turtles in my loop so I was forced to move over to the area where Twoshanks had leveled Twothirsty where the level 60 moths were.”

When Nisey was asked about any close calls she says “I don’t remember any that stand out but I did have a few times where I had to Feign Death to get aggro to drop off me and get it back onto my pet.”

Nisey has this advice for anyone wanting to try the Blood Thirsty Challenge “Well, advice that has been given out before can be applied to all of the challenges really. If it’s your first time trying any of the challenges out pick a class you know and enjoy. Don’t rush it. Especially with Blood Thirsty. It’s better to take your time and formulate a plan, working out a grinding path so if things go wrong you already know which way to go to escape. Take the time to read what your spells do and don’t do. Perhaps move AOE spells off to the side or don’t put them on your bar at all if you’re playing a class that doesn’t handle multiple mobs well. Scout out any unfamiliar areas or mobs. Ask questions, someone else’s knowledge could save you from making a mistake that lands you back on the character selection screen. Lastly, have fun.”

Is Nisey working on any other challengers or does she plan on taking a break for a while? “Well, I have a personal goal of trying to get all of the classes to max level as Blood Thirsty Challengers. I still have a good number of classes to go so no time for a break.”

Good luck with your other challengers Nisey and congratulations once again on becoming our fsixth Shadowlands Blood Thirsty Challenge champion with Kneesee!