Congratulations to Maygester and Ironmaster, Our Latest Shadowlands Iron Champions!

Congratulations to Maygester and Ironmaster on becoming our 12th and 13th Shadowlands Iron Man Challenge champions! This brings Ster’s total number of max level Shadowlands Iron challengers to 8 so far this expansion.

Maygester started their Iron Man journey just before the launch of the Battle for Azeroth expansion during the pre-launch event. This journey was completed in just over 194 days with a /played time of 3 days and 10 hours. Overall, Ster thinks it took him approximately 2 months to go from level 50 to 60.

With Mage being a class that Ster is not that familiar with he tested out all of the specs before ultimately deciding to go with Frost spec. The shield options and ease of travel by utilizing the class’s teleporting capabilities were a big plus.

This time Ster chose to go with the Night Fae covenant as it just seems to be a decent covenant for most irons. Maygester also had some difficulty killing mobs in the Shadowlands specific zones. Due to this, Ster had to rely on the safer more Iron friendly daily world quests and bonus objectives in order to get her to max level. 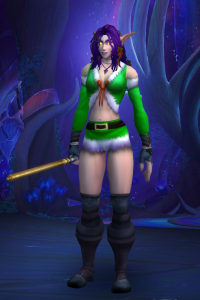 Ster also reached max level another Iron at the same time, Ironmaster, his 2nd Alliance druid. “No big deal on this toon, it’s my second druid. I rolled it to help other players figure out some Armory issues. Start to finish, Ironmaster dinged in 38 days, which just goes to show, Shadowlands is completely achievable for an Iron.”

What’s next for Ster? “Currently I’m working on a Horde – yes, a stinkin’ Horde Rogue. At this point, truth be told, this is the 3rd attempt at a Horde Rogue, killed one at level 30 in Pandaria, and another at level 11 roaming the countryside near Ratchet. I have a newfound respect for Horde players – definitely, Alliance has it better with fewer places trying to kill you and easier to navigate. Who the hell designed the Horde base Garrosh’s Landing?”

Best of luck with your Horde Rogue Ster and congratulations on reaching max level with Maygester and Ironmaster becoming our 12th and 13th  Shadowlands Iron Man Challenge champions!