Mebee is Dave the Hunter/Dave the Hooker’s first-ever max level challenge champion! “I have had others that have made max level, but I had used Heirloom gear and such which naturally disqualifies it from any challenge.”

What made Dave pick the Green Man Challenge? “Honestly, I just got tired of killing off way too many toons, I needed every advantage I could get!”

Mebee was created as a Human Beast Master Hunter. “Human because of the rep bonus, Hunter because I am Dave, Beast Master because what is a Hunter without a critter or two hanging out!”

Dave chose the following leveling path for Mebee: “Northshire Abbey through Level 6; Elwynn Forest through Level 16 stopping in Stormwind to launch the legion expansion (for the Dalaran Hearthstone); a few City Quests and stopping in the Dwarven District to start up Chromie time (for Wrath expansion) ready to head out for Northrend as necessary to continue leveling.”

“But Northrend was not in the books, Westfall completed all questlines. Deadridge, all quests up to setting the Seaforium Charges, NOPE, ain’t going into them guarded buildings. Duskwood, all questlines completed. STV Quests up to the point where to start chasing down them damn Trolls, sorry hordies but I lost too many and too recent to them damn TROLLS. Onto Dun Morogh and Kharanos no problems there. Just gives me the “willies” every time you get into that transporter thing.”

“Loch Modan and the “Valley of Kings” never really ever had problems there which brings us to the opening quest for the “Wetlands” at “Dun Algaz”. Oh yeah, I will talk about that in just a moment.”

Did Dave have any close calls while leveling Mebee? “While in STV I had an encounter with that damn Cat that brings its own adds…Not really that close but close enough to get the old heart a pumpin’. My final encounter where I leveled up to 60 was in Dun Algaz doing the “Stolen Keg” quest when in the round house “Ma’ruk Wyrmscale” spawned. He had been the fate of one of my recent past attempts, so I cleared out of the building without drawing aggro.”

“I was gonna get slick so outside the building I climbed a hillside so I could engage him ranged through the window…well then the pets took off and met him coming down the steps but since he was aggro’ed to me he exited the building before the pets stalled him. I didn’t think about the fact that the other two guards would follow as well.”

“As it would be Ma’ruk fell on the landing outside the entryway (the XP from him triggered the level up). By the way, I never had a chance to complete the “Stolen Keg” quest because when you hit Level 60 you immediately lose Chromie Time and are ported to your home city to start the quest chain to enter “Dragonflight” and I ain’t goin’ back!”

Dave has the following advice for others trying out the Green Man Challenge: “As I once said as a guest on the podcast, “DON’T DO IT” it will consume you; you will become obsessed; you will never be able to quit; Just say no to the “WOW Ironman Challenge”! LOL, Just Kidding! Just remember there is a thing called “The real World” out there and it can be pretty amazing when you let it!”

What’s next for Dave? Will he be working on another challengers or will he be taking a break? “I will be doing a lot of Invasion Clean up on my main toon, “Illeye” on Aerie Peak (US) as a member of the CTR Guild, and member, on Hiatus from the “Hyjal Volunteer Fire Department” getting my gear up to speed to do some “AOTC Mount runs” this weekend.”

“I sat out most of “Shadowlands” as it really didn’t work for me. I have 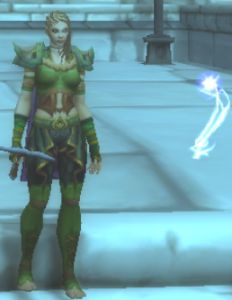 already started my Evoker, “Puffdamajik” and have leveled to 60. Not sure if near melee range DPS Caster is for me, maybe healing?? Yeah, give that 2 question marks! Eight years ago I retired the day before “Mists of Pandaria” came out, I started contract work about 6 months later, this time I am fully retired and have no real plans for being socially or economically productive so I will be in game, WOW or D3. See you there!”

“All things being equal I really didn’t know if I would ever succeed, thanks for the inspiration and support, the resources and insights, player interviews, and good humor. I think Tiber got out of the slammer for this week’s show… Until next time…”