Mendacity is Tiber’s 1st Iron Man challenger to reach max level and his 5 challenge champion for this expansion. His others include 3 Pacifists and a Green Man.

Mendacity was created as a Draenei Paladin. “He began as Retribution spec, but I switched to Protection when Ret becomes less survivable above level 32. I chose Draenei Paladin because Paladin is my favorite class in WoW. I also like the Draenei starting zone a lot, and the Draenei racial heal is good because it doesn’t have a cast time, and doesn’t need mana.”

Tiber took the following path while leveling Mendacity: “My leveling path for Mendacity was very well worn, until level 50. Azuremyst > Bloodmyst, escort Demolitionist quest > Loch Modan, kill Foreman Sharpsneer, complete zone (level 20+). > Duskwood, complete zone, except Raven Hill cemetery, and Stitches (30+). > Dustwallow Marsh, complete zone, except Release the Raptors quest, and the Rebel Tower (40+). > Northrend, dailies along the Southern coast, and jousting dailies, until XP dies (50+). 50 to 60 was very slow, and very unfamiliar territory for me. I got through it with a handful of “safe” world quests, Darkmoon Faire turn-ins, and then the Brewfest, and Hallow’s End holiday quests.”

Were there any close calls for Mendacity during their Iron Man journey? “I had a pretty bad scare, at level 56. I was doing a world quest on Maldraxxus, which I thought was pretty safe. The quest turns you into a mushroom, and you use mushroom powers that are pretty OP, to kill quest mobs, and fill the bar. During the quest, I suddenly noticed my health was falling fast! A mob that was not part of the quest was attacking me, and it was not affected by any of the quest abilities. I bubbled and ran (ran so far away), and barely escaped with a scrap of health.”

Tiber has the following advice for others trying out the Iron Man Challenge: “Iron Man is no place for surprises. I strongly recommend leveling your Iron Man in the zones you’re most familiar with.”

What’s next for Tiber? Will he be taking a break or will he be moving 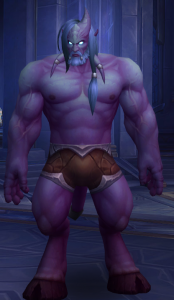 on to another challenger? “I have a level 50, and a level 35 Iron Man challengers I’m currently working on. The level 35 was my third attempt in the last leveling contest, and my only contest challenger to ever survive until the end of the contest.”

“Because Mendacity is an unusual word that confuses people sometimes, I’d like to include a clip of Paul Newman, and Burl Ives demonstrating how to say it (but mostly, because I really like the clip a lot).”

Good luck with your other challengers Tiber and congratulations once again on Mendacity becoming our 52nd Shadowlands Iron Man champion!