Congratulations to Metalnorn on becoming our 58th Shadowlands Iron Man Challenge champion! Metalnorn’s Iron Man journey took 3 days and 19 hours with a /played time of 20 hours and 48 minutes to complete!

Metalnorn is Norn’s second ever attempt at the Iron Man Challenge but their 1st ever challenge champion. “My first attempt was a week prior to this attempt, it was also a Tauren monk with the same name.”

Norn decided to play the Iron Man Challenge because they wanted to do something to break up the monotony of leveling. “I have always enjoyed making games harder for myself with self-imposed limitations and/or rules.”

Metalnorn was created as a Tauren Wind Walker Monk. “I went with this combination mainly because Monk is going to be my new main on a new realm come Dragonflight and Tauren is my favorite race to play. The spec being Wind Walker however just came down to it having access to karma, ToD, and countless other defensives and utility cooldowns. I dabbled a little in Mist Weaver for a safer playthrough, but the damage was lacking so I decided to just go for Wind Walker all the way to the end.”

“Since this was my second attempt, I didn’t know what path to take, so I just did quests in various zones until I felt it got too dangerous, or if I had a close call with death. The only change I made from my first attempt is that I did not go to Pandaria to die.”

Did Norn have any close calls while leveling Metalnorn? “I almost died in Tanaris to a few pirates chasing me in the water, after that I decided to leave the zone. I also had several close encounters with various high hitting mobs, but none that stood out.”

Norn has the following advice for others trying out the Iron Man Challenge: 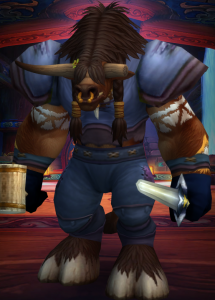 “Take your time and do not get impatient, it’s a marathon, not a race, you will get to the end if you take it slow and steady.”

What’s next for Norn? Will they be taking a break or working on more challengers? “I’m currently trying to decide how to level my main alt, it will either be another Iron Man, with possibly some more self-imposed rules/limitations, or a Green Man, but I am yet to decide the class.”

Good luck with any future challengers you decided to level in Dragonflight and congratulations once again on Metalnorn becoming our 58th Shadowlands Iron Man Challenge champion!