Congratulations to Mightnorn on becoming our 1st Green Man Challenge champion of Dragonflight and our 1st challenge champion overall for this new expansion! Mightnorn’s Green Man journey took 1 day, 21 hours, and 28 minutes with a /played time of 21 hours and 19 minutes to complete.

Mightnorn is Norn’s 1st max level challenger of Dragonflight but not their 1st challenge champion. “…My first one was Metalnorn that reached max in Shadowlands, just prior to Dragonflight release in the Iron Man Challenge. (I also had a Green Man challenger, Rocknorn, that died to a bug at 65.)”

Norn chose the play the Green Man Challenge this time because “Ever since I did my first Iron Man Challenge, I just can’t look at leveling the same. I feel the need to impose rules/limitations that make it harder and more exciting for myself. And with the unfortunate demise of Metalnorn at level 62 in Dragonflight, I decided to re-level a Tauren Monk, but this time as a Green Man instead of Iron, due to m+ and raid release being fairly close.”

Mightnorn was created as a Tauren Monk. “I went with Tauren Monk again, just because it is the char I will be maining in Dragonflight, but I felt like Metalnorn was tainted with that one death before reaching max, so I had to have a clean slate.”

Norn chose the following leveling path for Mightnorn: “This time I went with a more calculated route from 1-60, going into Mulgore first, Silverpine, Hillsbrad, the starting quests for Draenor, a bit of Tanaris and Un’Goro, and at that point I was level 50 something and decided to finish in Pandaria, where I went from Jade Forest, and finally Valley of the Four Winds. My 60-70 path was just following the main story quest and also doing all side quests I could find, I hit 70 in the first few quests of Thaldraszus.”

Did Norn have any close calls while leveling Mightnorn? “I had a few close calls with some rodents in Pandaria. However, the worst thing to happen in this 1-70 journey was the char Rocknorn dying at level 65 before I started this new char, to a bug in the Azure Span where I was tossed out of an arcane teleporter going to the top of the arcane sanctum and falling to my death.” 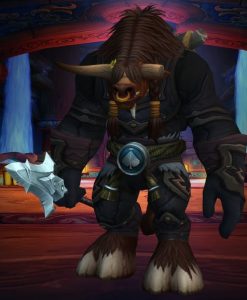 Challenge: “No real advice other than taking it slow and steady but I do however think that the Green Man Challenge is a great starting point if you want to make leveling more interesting.”

What’s next for Norn? Will they be taking a break or moving on to another challenger? “For now I will most likely be playing the new expac on my main, but I am planning on doing a 1-70 Iron Man on my Hunter alt eventually, and possibly do another Green Man for my Druid alt.”

Good luck on any future challenge attempts Norn and congratulations once again on Mightnorn becoming our 1st challenge champion of Dragonflight!