Congratulations to Monkster for reaching max level, making them our 9th Shadowlands Iron Man Challenge champion! Monkster’s total playtime comes in at just over 128 days with a /played time of 5 days.

Ster is one of our challenge veterans. He has reached max level with several characters over the course of many expansions. Monkster is Ster’s 4th Iron and 5th overall challenger to reach max level this expansion.

Ster has been on a roll lately with his Iron challengers. Playing different classes in the Iron Man Challenge can bring its own set of unique hurdles to cross. How did playing an Iron Monk differ from a Druid or a Rogue for Ster? “Well, this was my first Iron that didn’t have some form of stealth. No hiding. No getting to remote Shadowlands areas without local mobs noticing and chasing. Plus, no ability to kill SL NPCs. But what the monk does have is some pretty decent crowd control with Paralysis.”

Since Ster follows the same leveling path from 1 to 50, he’s shared with us the path he took with Monkster for levels 50 through 60: “Signed into the Monk after SL was released, so she’d accumulate lots of rest for future rested XP. At 50, did a sweep through BfA lands for all the chests. Almost all pay XP. At level 50, 7700xp each! At 51, 3850xp each. At 52, went through The Maw. It’s not that difficult if you’ve done it before and understand how quests work, how your helpers work, how to target the named mobs. By being 52, most of the Maw mobs are green. And you get about 1/2 level when you emerge in Oribos. I continued to make a daily sweep through BfA for the chests. Sure, by the time you’re 59 it’s only worth 1 bubble of XP, but better than nothing. Went through each of the 4 zones and did the Iron-friendly daily World Quests. Sometimes getting far-away flight-points is a challenge, but players like Xaya and others have figured out a safe path. Just ask around. Except for Maldraxxus (I don’t like that place), went to each zone and did as many Iron-friendly quests and Bonus Quests. After a couple of days of this, you often get the overall “Aid zone” quest which is mega-points. Around 57 or 58, things slowed 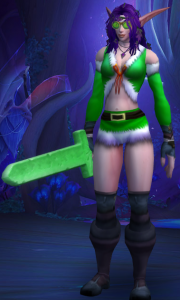 down a little since most bonus quests were done already and stuck waiting for daily doable World Quests. Just kept plugging away at world quests, BFA chests, and any holiday points that were available.”

What’s next for Ster? Well, he’ll be working on his Iron Hunter, Contester who was a previous contest challenger. “It’s refreshing to have a toon that can kill, one at a time, SL mobs. Using the same strategy above, already at level 55 in about a week. The Hunter has lots more flexibility with doable quests.”

Good luck with your Iron Hunter and once again congratulations on Monkster becoming our 9th Shadowlands Iron Man Challenge champion!