Congratulations to Nacelles on becoming our 8th Battle for Azeroth Pacifist Challenge champion! Cell reached max level with a /played time of 5 days and 11 hours.

Not every challenger follows the same path, so how did Cell go about guiding Nacelles to max level? “With the exception of WoD, I always hunted down paci safe quests, but there aren’t that many that aren’t gate locked into quest chains, so questing XP was minimal.” For levels 10 through 60 Cell parked Nacelles in Stormwind to do profession dailies until reaching the maximum amount of rested XP. Then he would take her out to run circles around Elwynn Forest and Darrowmere Lake in Western Plaguelands until the rested was gone, after which he would return her to Stormwind and start the cycle over again.

Leveling from 60 to 80 consisted of numerous laps around Sholazar Basin with some Dalaran fishing dailies on the side. Some of the dailies that were Pacifist safe offered at Halfhill Farm along with laps around Valley of the Four Winds as well as Jade Forest got him through levels 80 to 90. The collection of treasure chests in Warlords of Draenor zones helped get Nacelles from level 90 to 100.

At level 100, Cell decided it was time for Nacelles to start digging. He had her strictly working on Archeology dig sites in Kalimdor until reaching level 110. “Being a druid, this basically gave me a second hearthstone for Moonglade, which was a nice benefit.” To get through the last ten levels, Cell chose to pick up BfA chests and do laps around the inner sea coastline of Kul Tiras with some Kalimdor Archeology on the side to break things up a bit.

“The only close calls were flying too close to horde encampment guards and almost getting one-shotted. Happened a couple of times in the 100-110 range while doing Kalimdor Archeology. The nice part about playing a Resto Druid is that it is pretty easy to get away from anything that won’t one-shot you.”

Cell wasn’t too sure what advice he would pass on to other Pacifist challengers but he did share a couple of helpful tips. “I only ever 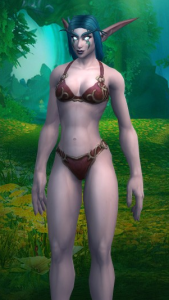 played on rested XP. Since most paci XP is from gathering, running only on rested can save you a lot of /played time, and the wait also helps to prevent burn out but it does take a lot longer in real-time. I also got a macro from the forums that posts your kills and KBs into your chatbox. That was a great little tool to have on hand.” The macro that Cell used was the following: /run local l={1197, 1487}; for i=1,table.getn(l) do print(format(“%s: %s”,GetAchievementLink(l[i]),GetStatistic(l[i]))) end;

What’s next for Cell? Well, he’s currently trying to get an Iron Man and Working Man Challenger to 120 before the Shadowlands pre-patch hits. “With winds of wisdom, I think this is possible, if not probable.”

Congratulations once again on getting Nacelles to max level and becoming our 8th Pacifist Challenge champion of Battle for Azeroth!