Congratulations to Passeyster for reaching max level, making her our 1st Dragonflight Pacifist Challenge champion! Passeyster started playing this expansion just over 3 weeks ago with a /played time of 1 day and 10 hours. This is Ster’s first max level champion in Dragonflight.

When asked to describe this Night Elf rogue, Ster said “Passeyster who reached level 60 in Shadowlands became a little bit of a filler toon to work on when not leveling my main Iron toons. Seems like you can only do so much each day on the Irons before running out of rested XP, so at the end of the day, I’d take this Outlaw spec’ed Passeyster out to do some archaeology and treasure hunting.”

What helped give Passeyster a boost was pro’s like Ferre and Xaya leading the paci charge and letting the rest of us know the hazards to avoid on a Pacifist. Xaya started a thread on the WoW Challenges forum called “Paci-Safe quests in Dragonflight” which is must-reading for Pacifist challengers. I must admit, I didn’t take the pacifist over to Dragon Isles – even though a rogue can easily sneak around, I felt the risk of getting a proximity kill was too great. So Passeyster pretty much stuck to Eastern Kingdoms and Kalimdor for this expansion.

What made this Pacifist fun was the little bit of a leveling race between Xaya, Ferre, and Passeyster. It didn’t take too long to catch up with those two, but unfortunately Xaya’s toon dropped out due to a kill in Dragon Isles. So down to Ferre and Passeyster, each would leap-frog the other each day in level, with vague comments in guild chat like “Oh, just hanging around, not doing much” – only to find the scoundrel had leveled up the next day. To be honest, I think Ferre would have ultimately won this race, but thanks to a under-performing PC and display, she accidentally killed a critter. That left Passeyster just a couple of levels to hit 70. So if you don’t mind archi as a way of leveling, your paci can hit max level too. 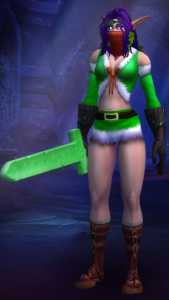 What’s next? “Oh, just working on the main Irons Elfster and Catster, both currently at level 65. The challenge with the Dragonflight expansion at this stage is learning which quests are iron-safe and which areas to avoid. So its a slow leveling process.”

Good luck with your other challengers Ster and congratulations once again on Passeyster becoming our 1st Dragonflight Pacifist Challenge champion!