Congratulations to Soulsnuffer on becoming our second Blood Thirsty challenger to reach level 60 in Shadowlands. This character’s total /played time comes in at 21 days, 22 minutes. This character is an older Blood Thirsty that got caught up in the level squish. She previously had reached level 120 during Battle for Azeroth. Her approximate Shadowlands /played time to get from 50 to 60 was about 4 days, 18 hours.

Nisey had previously reached max level during BfA with a total of 4 Blood Thirsty challengers: Soldmysoul, Soulshield, Soulstoned, and Soulsnuffer. She also hit 120 with a Pacifist challenger, Gentlesoul however this is her first max level challenger during Shadowlands.

Why did Nisey choose Blood Thirsty challenge for Soulsnuffer? “While I do have an a couple of Irons and one Pacifist challenger, the Blood Thirsty challenge has just been a better fit for me. Questing tends to stress me out a lot as at times I’ll have trouble remembering what a specific quest involves or if its one of those one that should be left be for challengers. With the Blood Thirsty challenge all I really need to do is find places that have mobs the class I’m working on can handle killing and just go. I find it a bit more relaxing and a bit less stressful then the questing challenges. As I often say, I’d rather pick what mob might end up killing me than have a quest pick it for me.”

What path did Nisey take with Soulsnuffer to reach level 60? “Well since this character had reached 120 during BfA and ended up as part of the level squish, this time around she only had to deal with levels 50 through 60. Everyone, at this time at least, must go through the Maw to get access to the level 50 and up content so with not having any choice in the matter into the Maw Soulsnuffer went. She was actually the character I had copied over for some of the beta testing I had done for Shadowlands. Those runs through the Maw on beta were pretty eye opening and full of surprises. While Blizzard has made some adjustments to the Maw since beta it still gave me a pretty good feel for what my priest could expect to face when Shadowlands went live and worked out pretty well for scouting purposes to a degree.”

Nisey also said “Completing the number of quests needed to exit the Maw felt so odd on a Blood but like I stated earlier we don’t really have a choice if we want to hit 60. I did not have the Threads of Fate quest available at the time Soulsnuffer came out of the Maw so I was pretty much restricted to Bastion. Grinding in the Shadowlands zones without completing the Threads of Fate quest brings a few speed bumps with it. The mobs don’t scale. In Bastion the mobs go up to level 53 and then jump to level 60, there are none in between due to the campaign quest line that should have pushed out you to the next zone around 53/54. You will be grinding green mobs for a level or two. Green mobs usually mean less xp. The xp given from the mobs was also all over the place.” 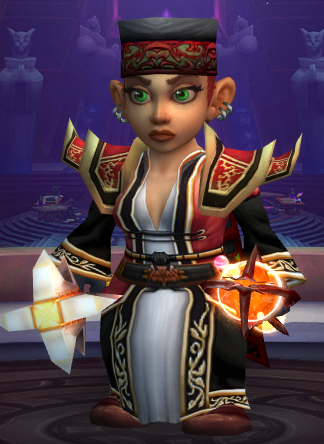 Nisey states “Even though you’ll come across several mobs that are the same level that doesn’t mean they will reward you the same xp amount. Rule of thumb seemed to be the lower the health of the mob the lower the xp they rewarded. The lower health mobs also seemed to be, for the most part, the safer options to grind. I spent a fair amount of time killing mobs near the entrance to the Temple of Purity. When the mobs there turned green I moved over to doing some loops under Hero’s Rest. I finished out the last couple of levels doing laps around the pools outside of Sagehaven killing the turtles.”

Did Nisey have any close calls while leveling Soulsnuffer this time around? “No, not really. I did get a little low a few times when I had to switch over to the level 60 mobs while trying to figure out what mobs were going to work better for me to kill but not low enough to consider them to be close calls.”

Nisey has the following advice for others wanting to try out the Blood Thirsty Challenge: “Be prepared to die. It will most likely happen a few times until you figure out what approach to it works for you. Scout out areas or mobs that are unfamiliar to you. It helps to have an idea of any big damage spells or loss of character control spells a mob may be about to launch into your face. Settle in and get comfy this is not a quick challenge to complete. Rested xp is your friend as a Blood Thirsty. It will double your xp gains off the mobs you’re killing which in turn will lessen the amount of mob kills needed to advance to the next level. Lastly, remember to have fun.”

What’s next for Nisey? “I am actually working on several other challengers. My goal is to try to get one of every class to max as a Blood Thirsty challenger. Will it happen? I don’t know but I am going to give it try. I also have a couple of Irons I am slowly working on.”

Good luck with your other challengers Nisey and congratulations once again on becoming our second Shadowlands Blood Thirsty Challenge champion with Soulsnuffer!