Congratulations to Soulstoned on becoming our fourth Blood Thirsty Challenger to reach Level 60 in Shadowlands. This character’s total real world time comes in at 1,670 days,  1 hours and 56 minutes. Her Shadowlands /played time was about 20 days, 4 hours, 17 minutes.

Nisey has previously reached max level during Battle for Azeroth with Soulstoned. This is Nisey’s third Shadowlands Blood Thirsty Champion.

Why is the Blood Thirsty challenge Nisey’s main Challenge of choice? “I ultimately get to choose what mob going to kill me in the end and sometimes it’s just nice to not have to worry about this quest or that quest. I can just jump in and head over to an area I picked out to grind in and go. I find it a bit more relaxing than the challenges where questing is involved.”

What path did Nisey take with Soulstoned to reach level 60? “After coming out of The Maw my only option was to level in Bastion due to threads of fate not being available for bloods. I tend to start out by doing some small laps near Aspirant’s Rest killing neutral mobs including some of the cranes moths, cloudgazers, and turtles. I try to hang out there until level 53 if I am able to. Depends on how many other players are there killing the same mobs I’m trying to kill. My next stop is near Hero’s Rest. I’ve worked out a pretty big loop near there killing more moths, cloud grazers, courses, and turtles. At level 57 or 58, depending on the state of my gear, I head over to Sagehaven and start killing the turtles over there that hang out around the pools of water. I go there because I hardly ever see anyone else killing those turtle so there is less mob competition and it’s a different color pallet to look at.”

Did Nisey have any close calls while leveling Soulstoned? “The worst close call I had while leveling 50 to 60 was rather strange. I was grinding away and went to pull a mob and when I started to 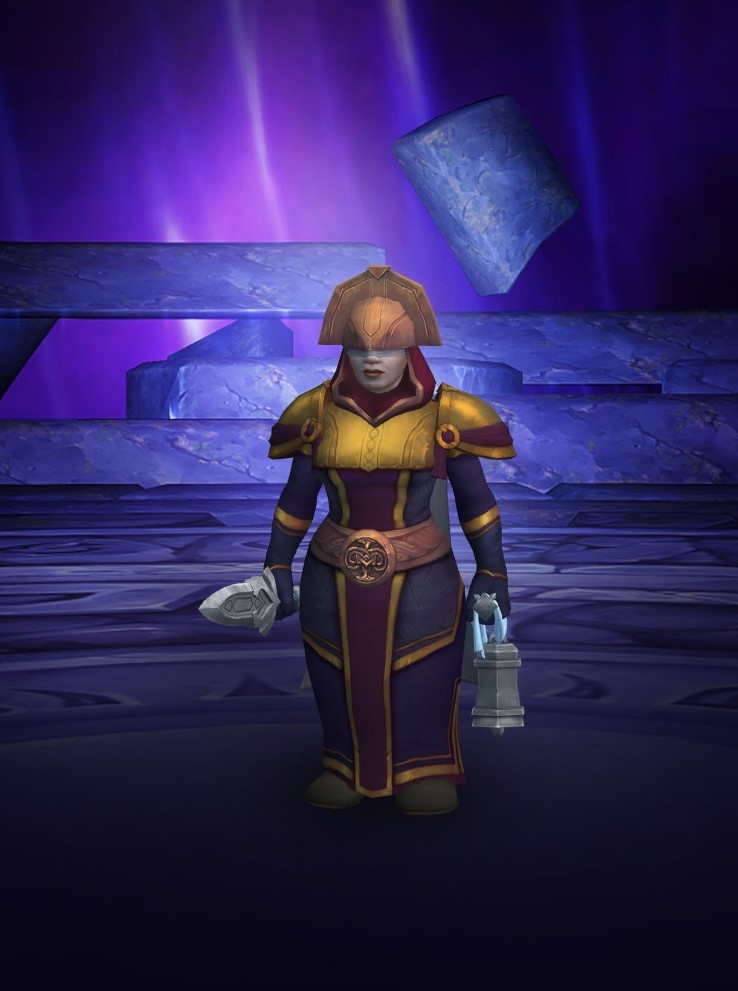 hit my second spell in my rotation I noticed the first one had not gone off yet. I then noticed my voidwalker was nowhere to be seen. So I started running and hitting some of my oh shit buttons figuring they would work or overload the commands finally d/c me fully. Neither happened. I actually ran from half way across the map and was still in combat. When I got to Sagehaven it finally sunk in there were no mobs anywhere. I couldn’t talk in general chat. I couldn’t even log out. After about 15 minutes I was finally d/c’d and then couldn’t get back in. All of the servers that are connected to mine were suddenly offline. Something went sideways with the data involving those servers and Blizzard had to fix what went wrong and didn’t have an ETA on when it would be fixed. I think it took an hour or two before they got it sorted. When I finally could log back in I figured I was logging back in to a dead challenger. To my surprise I was standing near the one turtle pond in the path of a patrolling fox but still alive and not in combat. I moved over to safer spot and hearthed out. My nerves needed a day to recover from that one.”

Nisey has the following advice for others wanting to try out the Blood Thirsty Challenge: “I’d say be prepared for your character to die. It’s going to happen at some point at least until you get your feet under you and figure out a path that works for the class you are on and with your play style. Don’t rush it. Bad things tend to happen when trying to rush through a level. You’ll start taking risks you wouldn’t normally and it’s not worth it. Gotta be patient. Don’t be afraid to ask your fellow challengers what they do or where they go. Their path may not work for you but maybe you can take a look at it and modify it to work for you. lastly I know it’s been said before but using a scout with mobs you’ve never killed before with the class you are playing will help a lot.”

What’s next for Nisey? “Right now I have more challengers than I have time to level. I have several more Blood Thirsty Challengers I’m working on. I want to try to get one of every class to max as a Blood. Don’t know if I’ll have time to do it but I’m going to try. I also have an Iron I’m slowly working on.”

Good luck with your other challengers Nisey and congratulations once again on becoming our fourth Shadowlands Blood Thirsty Challenge champion with Soulstoned!