Congratulations to Stagster on becoming our 3rd Shadowlands Iron champion.

This is the first Iron Rogue to become a Shadowlands champion, coming in 3rd place overall on the Iron Man leaderboard and is Ster’s second Shadowlands max level challenger. His first being a Pacifist named Passeyster. Stagster, an outlaw rogue, got her name from a prior toon’s death – having been gored to death by some Midland stags in BfA. “I like to name my rerolled toons based on the previous death, so Stagster was the obvious choice,” says Ster. “Unfortunately, some names are rejected by Blizzard for being too long, such as GotmynoggincrushedbyaFelReaver.”

It took 5 days and 1 hour of /played time to go from 1 to 60. Ster’s leveling strategy for Stagster? “First, get to 53 in old world. The climb from 1-50 is fairly fast these days with the use of Chromie time. Simply go through your favorite zones, cherry-picking the best ones, and skipping the risky ones. Once you hit 50 (and Chromie time ends), continue to harvest treasure chests each day in BfA – they pay well until level 54. Once Stagster was 54, she started doing the quests in Shadowlands. Going thru the Maw is fairly easy on toons that have stealth, such as a rogue and druid.”

“Stagster pretty much kept to the areas of Bastion and Ardenweald. Revendreth is not very iron friendly, and Maldraxxus is the Redridge of Shadowlands. Stay out of Maldraxxus on an iron. I’d guess about 1/2 of the daily World and Bonus quests were doable on a rogue. The killing quests were not doable, but any quest to go collect 10 items or click 15 things on the ground were very easy with stealth, SAP, and Vanish. In addition, Stagster would do a daily treasure chest collection loop thru BfA – even thous each chest only pays about 800xp with rest, it was easy to get between 15-20 of them 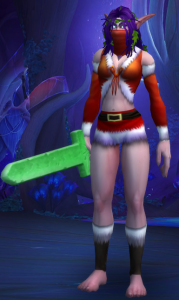 What’s next for Ster? “Already have an iron druid up to level 54, will be working on that toon. Good luck challengers, so far a hunter, pally, and now a rogue have made max level in Shadowlands – you can too!”

Once again congratulations Ster on becoming our 3rd Shadowlands Iron champion with Stagster and best of luck with your Iron druid!