Congratulations to Tejbegriz on becoming our first Iron challenger to reach level 60 in Shadowlands.

The saying “third time’s the charm” seemed to ring true for Corpsegrind. Tejbegriz the 1st and 2nd succumbed to the challenges of navigating the Shadowlands but were still instrumental in helping him find a successful leveling path for Tejbegriz the 3rd. “This character was my third (attempt) in SL… (I) made slight improvements to leveling routes to save a lot of time and I also chose cataclysm at Chromie and with that I also could fly to point-to-point which made questing even faster. From level 1 to 30 it took me about an afternoon thanks to the new leveling system we have in this expansion.”

Corpsegrind’s /played time with Tejbegriz the 3rd was 3 days and 14 hours. “…which is quite surprising due to the fact that I had to wait a lot every time after (using) bubble+hearth, I never left sanctuaries while waiting for cooldowns to drop…Up until level 50 it seems fast, but above 50 every level feels like it’s taking forever to level up.”

What was it like for Corposegrind taking Tejbegriz the 3rd through the Maw? “The maw was like nothing else I (had) ever seen before, literally I had to be ready to bubble hearth at any given moment. When I began to do the introduction storyline the third quest was already one of those kinds where no mistakes (are) allowed due to the one-shotting abilities the quest-mob got in the quest called “Ruiner’s End” where you have to face a Mawsworn that got roughly about 6-8 times more hit points as you have. Nearly all the spells I had there had to be used up and run away as fast I could to avoid his chains then hit him with everything again. Then following the storyline “A Flight from Darkness” where other Mawsworn appear and chase Thrall, Jaina, and others lots of AoE pools show up along with hostiles that turned the escort quest into a survival fest. There I first had to bubble hearth because I forgot about aggro control and pulled 3 Mawsworn and that was way too much, on (the) second attempt it was all about self-heal. From that point on there was a change in the usage of abilities, I found (the) Prot Paladin’s spell rotation quite sophisticated compared to BFA, here I stopped wasting holy power on Shield of the Righteous, and instead of using up reserves instantly I always gathered up as much holy power as I could so there would always be a guaranteed Word of Glory when needed and that improved chances of survival remarkably. There (were a) few spells I didn’t use, not even once: Lay on Hands, Blessing of Sacrifice, Blessing of Protection. At first glance, Lay on Hands looked like a must-have useful ability, but when used it gives Forbearance for 30 seconds where divine shield can’t be used, so there’s no escape for that duration plus if WoG isn’t enough for a self heal then it’s best to leave combat.”

“Pally’s Blessing of Sacrifice is a big no-no, first, a party is needed to use it which is against Iron Man rules, and on the other hand taking extra damage to save others can decrease chances of survival greatly. Finally, Blessing of Protection is good to use if necessary, great ability for gambling at high stakes where just a little self-heal or damage is needed to defeat hostiles, the forbearance you get expires earlier since it’s up in the moment the ability is used.”

“…overall, tank spec for pally improved a lot and in Shadowlands it became more capable of doing an Iron Man challenge.”

Knowing your options in an emergency can make the difference between living to tell the tale or ending up on the character creation screen. Corpsegrind has taken the time to get to know Tejbegriz the 3rd’s Paladin abilities very well and has come to truly appreciate the famous pally bubble hearth. “(It’s) an amazing ability for a clean exit, no interruptions, no way to die when it’s up, and it removes debuffs that would kill my character otherwise. After a long time, I realized that in some cases bubble hearth (was) not really necessary, there are lots of defensive abilities I can use while running away and when I encountered tough creatures I started to pull them through longer distances near-evade range so whenever a situation became difficult I simply just used Guardian of Ancient Kings and healed myself a bit and took a few steps back to make hostiles evade, but in close call situations bubble hearth still takes priority.”

Corpsegrind’s strategy to get from level 50 to 60 incorporated a lot of things we’ve talked about before like knowing the mobs you’re going up against, knowing your defensive cooldowns, and not being afraid to change things up if the path you are attempting isn’t working out. “At first, I chose the regular storyline mode, which was enough to get to 54 and a half, I forgot how scaling intensifies above 50, not knowing that I did every quest that relates to the main story but if not for the 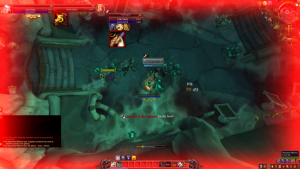 bubble+hearth I would have surely died 5-6 times. Quest creatures in SL have easy mechanics to follow, but at first encounters they are formidable: There are stacking debuffs, channeling spells that take off a good chunk of HP / second, most common poison reduces damage, etc. After I got to the level where I had 2 silencing abilities I had to use them constantly because most spellcasting creatures used crowd control and damaging AoE abilities not to mention channeling which is quite common e.g. in Maldraxxus Guardian of the Blade that can put runes around itself empowering a special ability called spectral shackle which can hit like a truck and it’s a channeling ability. That was the second toughest quest mob for me. Until 54 it was mostly fine but then I got to the point where I got back to the Maw where I had to kill off a quest mob that got about 50k hp while I had 6k, yet I tried but ran out of time, and despite avoiding every incoming AoE ability and fatal spells I couldn’t generate enough holy power to maintain a constant self-heal so after like 2-3 minutes of combat I hearthed out and changed to Threads of Fate. From there on leveling became swift again the only difference was that bonus quests require much more patience and awareness since there are patrolling mobs, lurking elites can be found here not to mention that freedom of movement in these areas barely exist. Completing breadcrumb quests was a steady source of gaining XP, I used them up first. When enough quests were completed I gave in the “aid” quests that were accumulated by completing bonus and side quests that were worth 72k XP on level 59 and it’s about 63k on level 55.”

“So the strategy that worked out for me was doing storyline till 54, then onto Threads of Fate. That was enough to still leave a lot of quests in Maldraxxus which was the last zone left for questing leaving enough to do if it becomes tough before 54. As for a covenant, I picked Revendreth for the AoE stuff that healed and the teleport.”

Corpsegrind found areas to love in Shadowlands along with some areas he could personally do without at least from a challenger perspective. “SL zones are something else. From the atmosphere to the small details this expansion won me over easily. As we saw earlier designers tried to create zones with a various vibe that can give different impressions about zones but this time they had put some serious effort into making these zones not just completely different from each other, but placed lots of elements coming from past successful games as well like the Maw that is a little similar to Diablo or Maldraxxus that sometimes feels like it just came from Doom Eternal. Challenge-wise the least enjoyable was The Maw. It was like a war-zone where no one can hide.”

Corpsegrind has the following advice for others attempting the Iron Man Challenge: “Don’t know about ranged challengers but surely for melee (especially for paladins). So these are the things I went through before I was able to even leave the starting zone: As for Paladin, the first thing I lacked was the inability to notice when is the time to pop the bubble+hearth. No need to stress while low on hp, if it makes you take hasty decisions, wrong ones, then learn the limits of your toon, make the most out of it until you stop worrying on low hp, use that time to think things through. Know what you’re up against: if your target got twice as much hp then you prepare to bail out. Before entering combat always have a backup plan or at least an exit strategy. Always keep an eye out for wandering elites or other players that can pull mobs on you.” 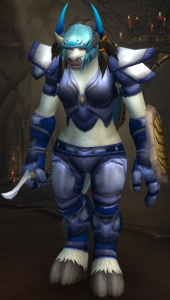 What’s next for Corpsegrind? “Another pally, or something different like a priest? I have to concentrate on my youtube channel now. I started a series of animated lore of wow that breaks down into zones tons of work ahead.”

We wish you the best of luck with your various projects Corpsegrind and once again congratulations on becoming our first Shadowlands Iron champion with Tejbegriz the 3rd!