Daenerys’ leveling path for Tomîra went something like this: “Well, she is a Draenei. I did all of the Draenei areas including Bloodmyst Isle. Then, I went to Westfall, then Duskwood, by that time I was at level to go to Tanaris. I avoid STV because there are too many quests that are dangerous for challenge toons ( I have lost many challengers there). After Tanaris, I went to the Blasted Lands and stayed there until 60. I chose this path to 60 because it was the easiest and least deadly, as far as mobs and quests. At 60, I went to Outlands, but I skipped HFP (too many dangerous mobs). I went straight to Zangarmarsh and quested there until I was high enough to go to Nagrand (64 I believe). I was then able to level from 64 to 70 in Nagrand. Nagrand has very few dangerous mobs and very few dangerous quests. At 70, I went to Wrath and did the entirety of Borean Tundra, then I quested the rest of the way to 80 in Grizzly Hills. In Cata content, I only quested in Mount Hyjal and Uldum. Those two zones safely got me to 90. I skipped Pandaria altogether because I had heard it can be hard for challengers and I didn’t want to take the risk. I was able to easily open my garrison with a green pally and I leveled from 90 to 100 in just Shadowmoon Valley (granted we have the extra xp going on right now). After making my way to BfA, I was not able to do many quests in Drustvar because not many were available. However, I did all available quests in Tiragarde Sound and all available quests in Stormsong Valley (with the exception of the quests that require three players). I did not risk doing those because I have tried those in full loom gear and not been able to do them. There was one quest in Tiragarde Sound where you have to kill two named sirens that I did skip. The reason for this is because you could not pull just one. They both pulled together and each of them had a 10 second silence. So, they would tag team you. I had to use Divine Steed and Divine Shield to get away from them.”

Did Daenerys have any close calls while leveling Tomîra? You could say that. “I had quite a few close calls. However, fortunately, I was a pally and had Divine Shield and Lay on Hands to save me many times. I am probably more of a risk taker than others when it comes to the challenge though, I push myself to see what my limits are.”

For those considering giving the Green Man Challenge a try, Daenerys would like to share the following advice: “My advice for those wanting to try the Green Man Challenge would be to not get full of yourself and think that just because you are wearing greens, you are going to be okay. There are some mobs (especially in Stormsong Valley) that hit really hard. Second, make sure you are playing a class that you know well, and that you are comfortable with, this makes it a lot easier to do the challenge. Finally, take your time. Don’t feel like you have to rush to get to max level just because there are others at max level, and don’t try to compete with everyone else, go at your own pace. If you are tired or frustrated, take a break, don’t keep going because that’s when you will let your guard down and lose your toon. Also, please don’t feel that just because the route I took worked for me, that it will work for you. You may 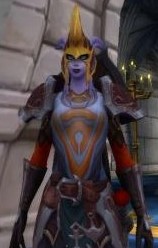 find that you don’t like some zones or some zones and quests are too dangerous (depending on the class you are playing). You have to find what works for you and what you are comfortable with doing. If you are really unsure of something…Scout it first!”

Will Daenerys be taking a break now that she’s gotten her first challenger to max level or is it time to jump back into the challenges with another character? “No, I’m not currently taking a break. Right now I am leveling a Night Elf Druid Working Man and a Night elf Rogue Pacifist. However, I also have a Human Paladin Tin Man and a Gnome Warrior Blood Thirsty (but I have not played either of those two toons in a long time).”

Daenerys good luck with your challengers and once again congratulations on becoming our 7th Battle for Azeroth Green Man Challenge champion with Tomîra!