Congratulations to Xayagettarra on becoming our 5th Battle for Azeroth Green Man Challenge champion! Xaya reached max level in just under 61 days with a /played time of 2 days and 21 hours.

Xaya, being one of our veteran challengers, has previously reached max level with his Iron Xayaforsi during the Pandaria expansion. That character was also the second Iron challenger to reach level 100 during the Warlords of Draenor expansion but met an unfortunate end at the start of Legion. Xaya has also reached level 120 with a Tin Man challenger.

When it comes to leveling we all seem to have our preferred path that we’ve worked on over time and Xaya is no different. “Since the xp buff, I tend to stick to zones that I like: Duskwood, Feralas, Dustswallow marsh, Winterspring, and Swamp of Sorrows. I stay out of Outlands except for Nagrand, in Wrath usually Borean Tundra, Dragonblight, and Grizzly Hills. I stay out of Cata except for starting quests, and in Pandaria Jade Forest and Valley of the four winds. Opening the garrison is quite easier on a Green Man, and Draenor is full of chests and bonus objectives so didn’t do much quests outside of Shadowmoon Valley. Legion is where it starts to be tricky, I hate the starting quest for Stormheim so always skip it. For BfA, since you can’t get the Heart of Azeroth, you have to explore around to get doable quests. Fortunately, I have flight so it is easier to find quest hubs (and on a Green Man, quests can help you by giving better gear).”

Did he have any close calls while leveling Xayagettarra? “A few, especially in Legion and BfA. The toon is a prot pally so dps is not really good but survivability is. Fights with two mobs were doable, but 3 was too much for my taste. Happened a few times that bubble was on CD so I had to run away. On the last levels, I usually bubbled hearth on second mob aggro and waited in the inn for the bubble to be usable again.”

When we asked Xaya if he had any advice for others wanting to try out the Green Man Challenge he has this to say, “Don’t rush things. And always have a way to get out of there fast 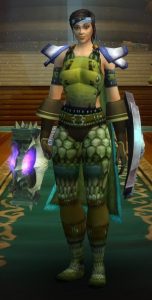 What’s next for Xaya? Is he planning on taking a break or are there other challengers to be leveled? “I currently have an Iron Man, Pacifist, Blood Thirsty, and Working Man. Level goes from 60 (paci) to 88 (Working Man). Working Man and Iron Man will be those I’ll concentrate on, but paci and Blood Thirsty will still get a level or two each week.”

Good luck on your other challengers Xaya and once again congratulations on getting Xayagettarra to max level and becoming our 5th Battle for Azeroth Green Man Challenge champion!