Congratulations to Xayatheria on becoming our 15th Shadowlands Iron Man Challenge champion! Xayatheria completed their Iron Man journey in just over 37 days with a /played time of 2 days, 12 hours, and 17 minutes.

Xaya is no stranger to the victor’s podium. He’s had many max level challengers over the years. His most recent challenge victors this expansion being his 2 Irons Xayarwinna, Xayasky, and his Pacifist Xayaparo.

After reaching 60 with his Iron Warrior, Xaya decided to try leveling an Iron Priest. “I chose Discipline because it is the spec of my regular Priest (healer in a dungeon group). Lost at least 2 before finally getting to 60.”

We always like to get some insight on the methods behind the madness when it comes to the leveling paths and strategies our challengers take. Xaya chose the following strategy to level Xayatheria: “I mostly used Chromie Time and stayed in Azeroth most of the time to 50, with some dailies in Pandaria. After getting flight I also did chests in MoP and WoD, plus exploring most of the zones. Going through the maw was not as hard as I expected, after that, I chose ‘Threads of Fate’ and Venthyr as my covenant because of the special ability. I switched from one zone to the other doing world quests, while also relatively safe quests and some bonus objectives.”

Shadowlands can be rather dangerous at times but it is possible to stay out of trouble, for the most part, depending on how you approach leveling. It sounds like Xaya’s approach helped him keep out of trouble. “I was very careful not to enter combat with Shadowmeld on CD. I also carefully scouted the various types of mobs to avoid mobs with DoTs. As a result, no real close calls, but I did have to use Shadowmeld many times, often after using fear on a mob.” 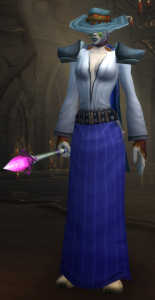 Iron Man Challenge: “Scouting is the key. Especially at high levels, many mobs just cannot be killed. Find out what you can kill and what will kill you.”

What’s next for Xaya? Will he be taking a break or is it time to start working on another challenger? “I currently have a Troll Warlock and a Draenei Hunter. After I get to 60 on those classes, I’ll probably try a Shaman or a Mage.”

Good luck with your other challengers Xaya and congratulations on Xayatheria becoming our 15th Shadowlands Iron champion!