Ferreh is Ferre’s 8th Pacifist champion and her 14th overall max level challenger this expansion. Her other champions include 4 Irons and 2 Working Man challengers.

Ferre chose to play the Pacifist Challenge because she just simply adores them. However, this is her 1st and so far only Horde challenger.

Ferre chose to go with a Tauren Resto Druid for Ferreh. “I like the ability to Prowl and especially to have instant flight form – a big help in herbing. Taurens also have a racial ability that grants quicker herbing (Cultivation). A Resto Druid has many healing spells, including HOT’s. If they draw aggro, a Rejuvenation followed by Dash provides a possible escape to get to somewhere safer.”

Ferre used the following strategy to level Ferreh: “It took a lot longer to get to level 5 and then to level 10 compared to all of my other pacifists. Part of that is my unfamiliarity with Horde flight paths, paci-safe quests, and safe gathering areas. Combined with no Prowl at low level and no Shadowmeld (and no crowd control), she felt very vulnerable when doing either gathering or exploration. She did use the (old-style) flight path tool to get exploration experience prior to level 5 (once she got some cash from selling DMF bags). After training fishing, she fished extensively in the pools at the DMF to get items to sell on the AH. She was good at this and able to buy some of the turn-in items for the DMF to help in leveling to 10.”

“After level 10, she focussed on daily cook and fish quests in Thunder Bluff along with holidays and DMF profession quests.”

“At 50, she did the Maw skip and took Threads of Fate, joining the Night Fae. From 50-60, she did a combination of World Quests, Profession World Quests, Cook/Fish dailies back in SW, holidays, and DMF activities as well as limited herbing in Bastion and Ardenweald. She dropped mining prior to going to SL zones, picking up Tailoring to take advantage of the SL profession WQs.”

Did Ferre encounter any close calls while leveling Ferreh? “Not really. A few cases of aggro while doing some exploration at low levels were scary though.”

Ferre has the following advice for others trying out the Pacifist Challenge: “This 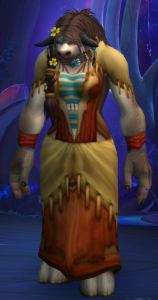 experience really highlighted for me how important it is to know the areas and quests. I didn’t (and don’t) know these things on the Horde side and the whole process took a lot longer than it would have for an Alliance Druid. Play what you know! Ironically, levels 50-60 were the easiest (since your faction is irrelevant). She concentrated on paci-safe world quests and profession WQs, just doing some limited herbing in areas I consider safe.”

What’s next for Ferre? Is she working on any other challengers or planning to take a break for a bit? Ferre tells us she still has a few Pacifist, Working Man, and Green Man challengers in progress that she is currently working on.

Best of luck with those other challengers Ferre and congratulations once again on Ferreh becoming our 21st Shadowlands Pacifist Challenge champion!