Congratulations to Ferreviola on reaching max level and becoming our 13th Battle for Azeroth Pacifist Challenge champion! It took Ferre just under 159 days with a /played time of 7 days and 3 hours to ding 120.

Ferreviola is Ferre’s fourth Pacifist and seventh overall challenger to reach max level this expansion. She has reached 120 with three other Pacifists, two Working, and one Iron.

Ferre has a great fondness for the Pacifist Challenge. With three previous max level pacifists to her credit, she has her leveling path pretty well nailed down. However, Ferreviola was a mage so Ferre did end up making a few adjustments to compensate for that:
“To get to level 5, I followed my usual pacifist pathway – exploring, making use of all free flight paths or other free transportation. I usually cover all of the starting zones, picking up the delivery quests as they become available. A fortunate meeting with a kind Blingtron gave her some starting money as well, supplemented by a fishing trip to Boralus at level 5.
One of my goals is to get to level 75 in all professions before the end of the soonest Darkmoon Faire. Leveling herbing and mining was a little slower on the mage since she can’t stealth. I did choose to make her a NE though, so she’d have Shadowmeld as an escape card. But mainly she needed to be careful not to aggro mobs near ore or herb nodes. I don’t think she ever had to actually run away at these levels. Probably Shadowmelded a few times.
As she leveled (in Frost spec but without an elemental), I did modify some of my gathering paths to avoid crowd control situations, but really wasn’t very different from the rogue or druid during leveling.
She started archeology around 90 – without any stealth, I wanted to generate no aggro. It took some getting used to, in terms of how close she could be to mobs when digging.  She ended up circling some mobs trying to find a spot far enough away from them to dig safely. The main problems were when a mob insisted on walking into her and aggroing that way. She did not like stealthed demons at the Desolace site – at one point she had raid markers on 5 of them that she’d seen sneaking around.”

Ferre did have a few close calls while leveling Ferreviola but a few were of a different variety then we are used to hearing: “Close calls were generally related to disconnects or computer freeze-ups. Scary when they happened, for sure. There was one instance when she had two elementals in Un’Goro aggro’d on her (one was apparently a respawn). She did choose to go Invisible and fortunately I remember the clear path out of the immediate area. Un’Goro was definitely one of her least favorite zones for archeology! She left one site there after seeing 3 devilsaurs in the area (she marked them) – that was two too many to deal with – time to come back another day.”

Ferre has the following advice for those wishing to try out the Pacifist Challenge: “I chose to do a Pacifist Mage at least partly because of the ease of teleporting around while doing archeology. This was very wonderful (and I’m spoiled for classes limited to one hearthstone!). It really did cut down the travel time.
In general, know where you are relative to the mobs around you – know your potential escape route. And spend some time watching the behavior of the mobs at a site that’s new to you. Some of them have some set paths and you’re best to stay out of their 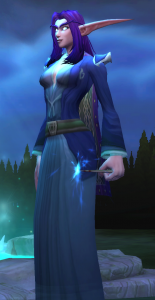 With seven max level challengers for this expansion will Ferre now be taking a bit of a break or are there other challengers still to level? “No break – this is the time to tick off the items on the challenger bucket list. I have a Human Rogue Pacifist (94)  as well as a Working Man and an Iron.”

We wish you the best of luck with your other challengers and once again congratulation on reaching max level with Ferreviola and becoming our 13th Battle for Azeroth Pacifist Challenge champion!