Congratulations to Ironbubble on becoming our 13th Battle for Azeroth Iron Man Challenge champion! This is their first challenger to reach max level, doing so in just under 51 days with a /played time of 3 days and 20 hours.

You might be thinking, why did Ironbubble give the Iron Man challenge a try? “Well, I tried the Iron Man Challenge a few years ago, but I gave up really fast. I played Classic since release in September and got burnt out playing it, but didn’t wanna come back to the end content of BfA before shadowlands releases, so I was guessing what I should do. I heard about the XP buff Blizzard gave to us and that was the point I decided to try the Iron Man Challenge again. It was a lot of fun leveling without any of the things that make life easier, it’s a pretty hard challenge.”

Did Ironbubble have any close calls while leveling? “Yes I had many close calls on this toon, but there are two heart-standing-still moments I can’t forget. The first one, I was flying, afk and I pressed the wrong button on my mouse and dismounted, but I found the bubble button at the right time. Just a dumb moment but if I had not had a bubble…

The second one was a really close moment. There were two of these animals in Zuldazar that were fighting against each other (low hp) and I wanted to find out if I attacked one, would the other one help me? They both got immediately full hp and attacked me. So I decided to run and added two other mobs on my way until I had a clear way in front of me. I had every cd/stun/slow out, I had nothing more and 20% hp and I couldn’t stop running and heal cause they were too much. I knew this was the end, at level 111. Then I luckily walked over a little-doesn’t-matter-stone-edge and the mobs need to run all the way around this stone, so I used this time to heal myself two or three times, then jumped down off the hill in front of me and I escaped. I needed to pause for a few hours to calm down until I could play again.”

Ironbubble has the following advice for those wanting to attempt any of the challenges: “You will die. Expect it! 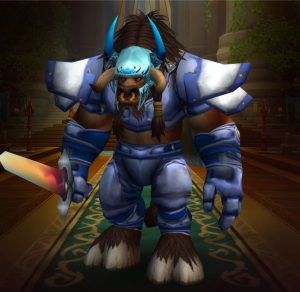 You need to change your playstyle and a lot of habits that you have from normal playing. The important thing is don’t give up! If you wanna do this, just don’t give up and try again.”

When we asked Ironbubble if they were working on any other challengers or if they would be taking a break they said, “No, I will take a break for a while. I’ve reached what I want and I’m happy with it. Maybe in future expansions when I get tired of the current content, I will try something new. Who knows? Maybe if any contests come out I might try them. It was a nice idea with the Survival Contest because I never played Survival, although I was to busy with my Iron toon to join in this time.”

Congratulations once again to Ironbubble on becoming our 13th Battle for Azeroth Iron Man Challenge champion!