Congratulations to Janglurc on becoming our 17th Shadowlands Iron Man Challenge champion! Janglurc has clocked in a total of 420 days and 19 hours of playtime with an in-game /played time of 7 days, 19 hours, and 17 minutes. However, having previously made it to 120, Janglurc’s /playtime for Shadowlands comes in at roughly 1 day and 9 hours.

While this is his first challenger to reach max level for Shadowlands, Jang is no stranger to the victor’s podium. He reached level 120 during Battle for Azeroth with 4 different challengers: 2 Irons, 1 Green Man, and 1 Pacifist.

We like to ask our challenge players what brought them to play or why they chose to play a specific challenge. Jang had this to say: “I have been doing nothing but challenge toons, mostly irons, for more than four years. It’s fun because every move you make matters, and there are consequences for failure.”

Since Janglurc started this expansion at level 50 due to the level squish that happened just before Shadowlands launched, Jang took the following path to go from level 50 to 60: “In SL, I got to level 52 using discovery from the lower level realms. After the Maw, I did the introductory quests in Bastion until the one where you can get one-shot. Then I switched to Threads of Fate for the rest of the way.”

Close calls can happen in a multitude of ways. Some you can see coming while others can completely blindside you. Did Janglurc have any close calls while leveling? “I don’t remember if I had any from 1-120 because that was over a year ago. I didn’t have many 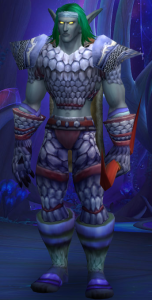 Jang has the following advice for those wanting to try out the Iron Man Challenge: “Don’t play during thunderstorms and make sure your internet connection is solid.”

What’s next for Jang? Will he be taking a break or diving back in with a different challenger? “Going to try to go back-to-back on an iron (currently 57) then hopefully max my paci (currently 51).”

Good luck with your Iron and Pacifist Jang and once again congratulations on becoming our 17th Shadowlands Iron Man champion with Janglurc!