Congratulations to Jangtest on becoming our 20th Battle for Azeroth Iron Man Challenge champion! Janglur guided Jangtest to max level in just under 82 days with a /played time of 5 days, 22 hours, and 55 minutes.

Janglur tends to stick with the leveling path he’s already tested out and had success with. While leveling Jangtest a few adjustments were made along the way though. “My paths are pretty consistent and I even documented them following an appearance on the podcast last year. The only difference was that this toon started as a Survival Hunter for the contest, and I had to skip some quests where I wasn’t comfortable getting up close and personal with certain mobs. But I switched to BM after the contest was over and all was right and good again.”

For those who are interested in knowing the details of the path Janglur takes you can find that information here.

Did Janglur have any close calls while leveling Jangtest? “I honestly never had a seriously close call with this toon. The closest I remember was while doing the Battle for Brennadam when I was at 118. I got down below half HP, but I never had an adrenaline-pumping moment. I Feigned Death and that was that.”

Janglur has the following advice for those wishing to try out the Iron Man Challenge: “Do what you know. Don’t experiment with an active Iron.” 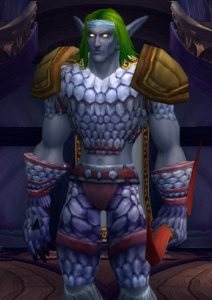 jumping back in to work on another challenger? “I have a level 88 paci that I’m going to continue working on. Plus I have to keep Ferre company late at night because she’s on Pacific time.”

Good luck with your Pacifist journey! I’m sure Ferre can answer any questions you may have along the way!

Once again, we’d like to congratulate you on reaching max level with Jangtest and becoming our 20th Battle for Azeroth Iron Man Challenge champion!