Congratulations to Ninetynine on becoming our 21st Battle for Azeroth Iron Man Challenge champion! Mrmacman guided Ninetynine to max level in just over 106 days with a /played time of 7 days, 1 hour, and 23 minutes.

Ninetynine is not Mrmacman’s first max level challenger. “This is my second max level, but my first regular after 98 deaths and/or disqualifications. Let me take a minute to shout out to my wife: we just celebrated our tenth wedding anniversary, and she has endured my Iron Man trial the whole time of our marriage. I’ve been trying unsuccessfully since Cataclysm. My first max was Passoneseven, which was my 17th attempt at a passive.”

When it came to figuring out what path to take with Ninetynine, Mrmacman decided upon the following: “I took some advice from ‘Ster and others, but specifically I chose to save some of the non-killing quests for 55+. But I did chose the explorer docs at 19-20. The reason I chose a human pally was because there weren’t a lot out there; I noted most were night elves and/or hunters. I was inspired by ‘Ster. He really motivated me. Fortunately for me, the summer world event was right in the middle of this trial.”

Were there any close calls while leveling Ninetynine? “I did have a few close calls; the most memorable was accidentally running into a room of mobs in Suramar. Fortunately, I could hit a couple protective cooldowns and lose aggro.”

Mrmacman has the following advice for those who may want to try out the Iron Man Challenge: “Never give up! It took me 99 tries and ten years, but I finally made it. Also, don’t worry about how long it takes. I was no 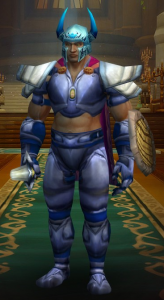 speed demon, but I kept at it.”

Now that Mrmacman has reached max level with his Iron (Ninetynine) and his Pacifist (Passoneseven) will he be taking a break or diving right back in? Looks like the answer to that question is diving back in. “My family recommended doing another ‘first,’ so I’ve already created ‘Hundred,’ a dwarf mage.”

Good luck with Hundred, we’ll all be cheering you on! Once again, congratulations on reaching max level with Ninetynine and becoming our 21st Battle for Azeroth Iron Man Challenge champion!