Congratulations to Khrys on getting Pacifist to 120 and becoming our 12th Battle for Azeroth Pacifist Challenge champion!

This is Khrys’ first ever max level challenger! Khrys reached max level on Pacifist in under 687 days with a /played of 7 days, 22 hours, 53 minutes.  “Yes!  This is the first pacifist I ever made.  I started her in September of 2018 and it’s been a slow but absolutely delightful journey getting her to 120.”

Khrys says “Pacifist began her journey before the Winds of Wisdom buff, so it took exploring all four starter zones plus some to reach level 4 and be able to pick up the low level quests in Stormwind to reach level 5. My dearest friend Leeta started not long after I did.  It was great fun comparing our journeys and chatting about them along the way.  New Tinkertown was home for a long time for both of us, going round and around and around our little gnome home.  Leeta ventured into the scary world of Dun Morogh before I did, but my little circle from New Tinkertown eventually became a big loop of everything dwarf as far as the eye could see and I pretty much lived there until level 60.”

Khrys mentioned that “The next adventure was Borean Tundra and avoiding all the horde areas I knew so well until finally we were high enough to hit the motherload, the promised land, Sholazar Basin.  If I could do nothing more than level a toon there I’d be a happy woman.  Up and down, back and forth, I followed the path of the river.  The sound of the water, the stunning visuals, the music playing softly in my ears, I could spend hours happily flying node to node soaking it all in.  The mobs weren’t so dense you couldn’t pick your weeds, and the respawn on ore and weeds was such that by the time you flew up one direction they were already popping back up behind you.”

“It was hard leaving Sholazar,” Khrys states  “but Panda land turned into a nice surprise once we found our path after the XP dried up in Panda.  Halfhill and Heartland were super rich in ore, and once you found the perfect height to avoid the packs of pacifist hungry birds invading the island, it became easier and easier to level efficiently. After that it was pretty much dailies and archeology from there.  I thought I’d found a perfect spot in BfA to be able to go out and weed and mine, but when I realized I didn’t even have the amount of health as a yellow bird flying above me, there was no way I’d be able to survive just getting there.”

Khrys had  a few heart stopping moments along Pacifist’s journey “One of the worst was aggroing the rare Fumblub Gearwing in Borean Tundra.  I didn’t realize he spawned i 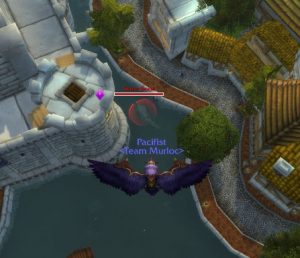 n the air, not on the ground, and he tagged me while I was making my rounds.  The little bugger just would not get off me, and I finally made it to a safe spot on land at about 18% health and was able to shadowmeld to drop aggro. However the most heart stopping was recently doing my dailies.  Not thinking about the fact I was over 110, I picked up my dailies as usual in SW but decided I didn’t want to do that fishing one again so I popped through the portal to Darnassas.  OMG I’m over 110.  I fell out of the sky and instantly flagged PVP as I was dropped into the middle of the battle for darkshore.  Thankfully it was about 4:30am my time and almost no one was around so I was able to quickly hearth out but I don’t think my heartbeat went back to normal for about an hour”.

Khrys offers this advice for anyone wanting to give the Pacifist Challenge a try: “Have a friend do the challenge with you. It was such great joy doing this with Leeta and sharing our paths, our terror and our ideas along the way. Be present! Don’t afk, try for little distractions, one wrong move will literally stop your run in an instant. This is the one toon you really want to be in the moment at all times. Always ask yourself, is what I’m about to do worth all the time it took me to get this far? If the answer is yes, go for it. But if not, and you have to question it, better to walk away than lose everything you’ve just invested into this toon. Oh!  And avoid the Sewer Beast at all costs.  He has a thing for challenge toons”.

What’s next for Khrys? Will she be taking a break or is it time to dive back into another challenge? “We’re going again! Next up…..Pacifist Monk named Miner!  Let’s doooo this!”

Congratulations once again Khrys on reaching max level with Pacifist and becoming our 12th Battle for Azeroth Pacifist Challenge Champion!