Congratulations to Pacileeta on becoming our 6th Battle for Azeroth Pacifist Challenge Champion. This is our very own Leeta’s 1st ever max level challenger. Pacileeta’s journey to max level lasted 498 days and 16 hours which worked out to a /played time of a little over 8 days. Leeta started this character back in November of 2018 when the Pilgrim’s Bounty and WoW’s 14th Anniversary events were occurring. There was lots of XP up for grabs making it a great time to start a Pacifist challenger.

When we asked Leeta what path she chose to take while leveling Pacileeta she shared with us the following: “Picking herbs and mining ore around New Tinkertown was the norm until I hit level 60… I know that place better than the back of my hand. Also once hitting level 5 got my Cooking and Fishing Professions so doing those dailies became an almost daily occurrence. Managed to level fishing in Boralus and got some gold in the process from level 5. As I leveled up I continued doing the Stormwind or Darnassus fishing and cooking dailies as well as adding those dailies from “Old” Dalaran (looking at you Marcia Chase…). One of my most favorite things was at about level 64 heading to Sholazar Basin to go round and round in circles picking herbs and mining ore… And I did this right up to about level 81… from memory. Using World Events has been a wonderful bonus especially the current Winds of Wisdom buff from Blizzard as well as the WoW 15th Anniversary Trivia Questions (which ran Nov 5th, 2019 – Jan 7th, 2020). Pilgrim’s Bounty has been great XP as well as Lunar Festival and Midsummer Fire Festival.”

You might be wondering if there was a specific reason for the leveling choices that Leeta made in regards to Pacileeta’s journey. A lot of her choices were based on advice from others who have reached max level with their own Pacifist challengers. “As Pacileeta has been my very first ever Pacifist toon I am very grateful for a lot of Pacifist advice from Ferre as well as Five. Also, there was much archy advice from Eexecute. Also a massive shoutout to my Paci-sister Khyrs who was also leveling her first-ever Pacifist toon (called Pacifist) so we discussed many things about leveling as we both had never played a Pacifist before.”

Close calls. We’ve all been there. Some close calls being more terrifying the others. Did Pacileeta have any? “I did have some second-guessing over the updated zones like Arathi Highlands and Blasted Lands due to the phasing however managed to find ways around like making sure I entered the zone on my ground mount and not flying into it in case I landed somewhere bad. Also from much experience with Iron and Blood Thirsty toons, I always made sure I had Goblin Gliders in my bag and hot keyed to my mouse.”

As for any tips or advice for others that might be attempting the Pacifist Challenge Leeta has this to say: “I had never really seen Pacifist as something I had wanted to try… I thought picking flowers and mining ore as well as looking for those non-kill quests for 120 levels was not something that would interest me however I will fully admit that playing a Pacifist Toon has been super engaging both in a relaxed calming way as well as this intensity that no other type of Challenge toon has given me before.” 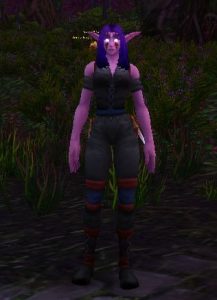 If you are on the fence about trying the Pacifist Challenge, just give it a go. What have you got to lose? You might just love it as much as Leeta ended up doing.

What’s next for Leeta you might be wondering? “Now that I have hit max on Pacileeta I can get back to my 9 Blood Thirsty toons as well as (perhaps) doing more teams. And just as I really am a Horde girl at heart I will continue to level my “baby” Pacifist toon, a Tauren Druid who is currently level 75.”

Congratulations once again Leeta on reaching max level with Pacileeta and becoming our 6th Battle for Azeroth Pacifist Challenge Champion!