Congratulations to Soulstoned, our 4th BfA champion on the Blood Thirsty Challenge! Patience really does pay off, Soulstoned, a Dwarf Warlock using the Destruction spec was created way back in 2016. Created in early Legion, the toon has a /played of 16 days and 20 hours. Or in human real-world time: that’s 1,298 days! This is Nisey’s 3rd Max level Blood Thirsty. The other two are a Demon Hunter (Soldmysoul) and a Paladin (Soulshield). With all of her Blood Thirsty challengers Nisey tries to play them on rested XP mostly. More XP for the kills means the less time spent killing mobs.

Since she was a Dwarf, she did Dun Morogh and Loch Modan with a bit of rare hunting in those zones, hoping for free 6 slot bags to drop and greens to sell on AH or to wear. Full greens on those retail bloods? Yes, now that it’s allowed because why make it harder?

Nisey’s overall leveling strategy – After Loch Modan I head to Wetlands, Arathi Highlands, The Hinterlands. In Hinterlands I was mostly killing Owl Beasts, they drop small eggs which are a good AH items at times and they were also dropping a fair amount of silk. It looks like I also spent some time in Western Plaguelands, Eastern Plaguelands, Fel Wood, Winterspring and Blasted Lands. I did spend some time in the Outland zones of Zangermarsh, Nagrand, and Netherstorm before heading to Northrend. In Northrend I leveled in Borean, Sholazar, Dragonblight (around Lake Indu’le, there was a chest that would sometimes spawn there) and Icecrown. I spent 3 levels in Jade Forest near Dawn’s Blossom then went to Uldum until 90. I spent the entire time in WoD in Shadowmoon Valley. Since I didn’t have to move around with world scaling being a thing now, I chose to stay with a path I knew had mobs I could handle. At 98 I bailed out of WoD and headed to the Broken Isles and set up camp in Azsuna and leveled there until 110. At 110 I headed into the BfA zone of Tiragarde Sound. I modified the path that I used with my paladin and shortened it by a lot to make it a bit “safer” for the warlock.

Nisey had a few close calls: The most memorable close call happened in Azsuna. Defensive stance was broken (still kinda is) with the void walker and he took off into the middle of several mobs 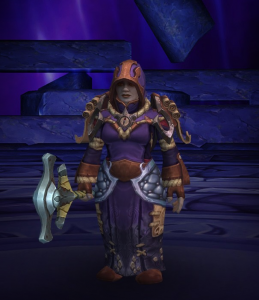 because I was too slow to react he ended up taunting and sitting in the middle of a rapid spawn area and as soon as I got one mob down, two more were popping back up. I couldn’t health funnel him any longer as I’d already used Warlock cookies and was rather low on health again. Had to leave the void walker to his own demise as I ran for the hills and hoped for the remaining mobs to reset which they did thankfully. That was a hand shaking close call so I ended up logging out and walking away for a bit after hearthing to take a few hours to regroup and settle down.

Nisey’s best advice for the BT Challenge – Do your homework, test out potential areas you want to grind in with your character before you take them there. It helps to know what your challenger is in for and if it’s a feasible location. Also don’t rush it. This challenge will take a bit of time since you level up by killing mobs. So be prepared to be in it for the long haul. Rushing and pulling extra mobs might cost you.

What’s next for Nisey? She is trying to get one of every class to max level in the Blood Thirsty Challenge. Right now her Disc Priest is the next closest to max at level 111 so she is working on that before the Shadowlands pre patch arrives.