Congratulations to Tomîra on becoming our 4th Shadowlands Green Man Challenge champion! Tomîra’s Green Man journey has taken 927 days, 12 hours, and 7 minutes with an overall /played time of 6 days and 20 hours to complete. Having previously reached Green Man champion status at level 120, we were able to estimate Tomîra’s leveling time for Shadowlands (50 – 60) as 1 day and 17 hours.

Daenerys chose to play the Green Man Challenge this time out because it sounded like it would be fun to play.

Tomîra was created as a Draenei Protection Paladin. “There wasn’t really any specific reason I chose Draenei, other than the fact that I think they look cool. The reason I chose Protection Paladin is because I really like playing paladins, I’m comfortable with that class, and prot pallys can withstand quite a bit of damage even if they are not all the way geared out. In addition, pallys also have healing and protective spells no matter what spec you choose (which is always a nice bonus).”

When we asked Daenerys what leveling path she chose for Tomîra she had this to say: “I really don’t remember the path I took prior to Shadowlands because I had to stop playing my Green Man for a while due to the website being broken (unable to update green man without being flagged) while they were working on coding and such. I also stopped playing WoW for about a year and just recently came back. So, as far as the path I took in SL, I first skipped the Maw intro. Then, I did all the story quests and side quests (except for the ones that said they required 3 or more players). When I was doing the intro to Maldraxxus quests in the arena, I waited until I saw other people attacking stuff, and then I would hit the mobs. That way, I didn’t have a bunch of stuff hitting me at once. Also, while in Maldraxxus, I wanted to do the quest to open up the big arena WQ. So, I waited until people were killing the elites and then I would run in and smack the elite, bubble, and run away. Maldraxxus was kind of scary, but everything else was pretty easy. I did not finish Ardenweald since I made it to 60 midway through questing there.”

Did Daenerys have any close calls while leveling Tomîra? “I did have one close call that I remember really well. It was when I was in Bastion. I wanted to know if I could solo one of the 3+ person quests. So, I ran in and started to attack the mob (making sure all my cooldowns were available first). However, I didn’t know that this particular mob not only had fear but also had a debuff that did damage to you over time if you were within a certain range of the mob. So, I was not only getting hit by the debuff but I got feared into two other mobs while fighting the elite. I did have my cooldowns to save me, but I got down to about 20 percent health before I finally got out of combat.”

Daenerys has the following advice for others trying out the Green Man Challenge: “One big thing I would tell someone who is trying out the Green Man Challenge is to not think you are safe just because you are wearing green gear. Green gear definitely helps, but it is not as protective as you think it might be against some mobs. Also, empty your bags frequently so you don’t accidentally equip a blue or a purple piece of gear. It is very easy to do this (I have done it before), and this can be devastating if you are four or five levels from max and you get flagged for equipping a rare item. One last thing is to pick a class that you are comfortable with. If you are comfortable with the class, you will likely do better!”

What’s next for Daenerys? Will she be taking a break or does she have other challengers 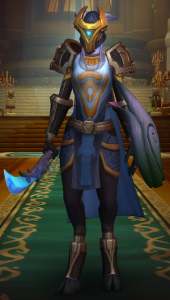 in the works? “Right now I am working on a Working Man. She is a Night Elf Hunter. I also have a Blood Thirsty challenger that is a Gnome Warrior. However, I have not played my BT in some time.”

Good luck with your other challengers, and congratulations once again on Tomîra reaching max level and becoming our 4th Shadowlands Green Man Challenge champion!