Congratulations to Xayamill on becoming our 18th Battle for Azeroth Iron Man Challenge champion! Xaya reached max level in just under 45 days with a /played time of 3 days, 4 hours, and 22 minutes.

Xaya chose to go Pandaren with this hunter and with the Winds of Wisdom buff currently in place he ended up making some adjustments to his normal leveling path. “As a Pandaren, I got out of the starting area around level 20. There was also the 1000 Boat Bash, and Midsummer Festival, so I could skip lots of my usual path: part of Duskwood, Southern Barrens, Felwood, Wintersping below 60. No Nagrand at all only did part of Dragonblight in the 60-80 bracket before heading to Pandaria. I always open my garrison on hunters so it was no different, but I chose the wrong weapon for Legion so wasn’t able to open the class hall (which I usually do on hunters). BfA is a series of chests and quest hubs hunts.”

The need to know is great! Did Xaya have any close calls while level Xayamill? You could say a few flashing screens popped up during this Pandaren’s leveling journey. One, however, sticks out in particular; “…Once in Tiragarde, you have to kill 2 named wailing sirens helped by an NPC. The NPC usually go after one so I froze the other and started combat, but at some point, the NPC attacked and defroze the second one who came after me. But I managed to finish the quest before needing to feign death.”

As for what advice Xaya would give to others wanting to give any of the challenges a try he had this to say: “Be patient, take your time. And always have a way to get out of there fast if things go wrong (feign death, shadow meld, vanish, bubble hearth, escape 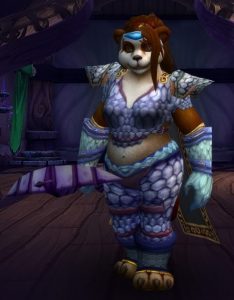 What’s next for Xaya? Will he be taking a bit of break or are there other challengers to level? “I have a level 80 Working Man, a level 77 Paci, and a level 68 Blood Thirsty. I’ll concentrate on the Working Man, but Paci and BT should get a few levels each week too.”

Best of luck on your other challengers Xaya and once again congratulations on becoming our 18th Battle for Azeroth Iron Man Challenge champion with Xayamill!