Xaya is no stranger to our victor’s podium. Xayanawa is Xaya’s 11th Shadowlands Iron champion and his 17th champion overall during this expansion. His other challenge champions for Shadowlands include 1 Blood Thirsty, 2 Pacifists, 1 Green Man, 1 Working Man, and 1 Tin Man. He’s also had an Iron Man champion for MoP and WoD.

With Xayanaw being an Iron Man contest entry the clock was ticking so time was of the essence to get as high as possible before the contest was over. “I tried to maximize XP until the end of the contest (level 34 for that toon). Afterward, since I had also chosen a Horde toon (I usually play Alliance on challengers), decided to use Chromie time and mostly stay in Azeroth, while doing dailies in Pandaria and Northrend. After 50, done mostly easy WQ and finished with the candy buckets.”

Did Xaya have any close calls while leveling with Xayanawa? “Not really, but I got flagged PvP while doing the candy buckets because Arathi Highlands was now a PvP place for horde toons (as can be Darkshore).”

Xaya has the following advice for others trying out the Iron Man Challenge: “Same as 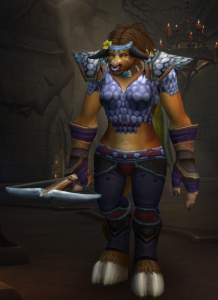 always: know the quests and areas you do, know your class, and if in doubt, scout it out!”

What’s next for Xaya? Is he working on any other challengers or will he be taking a break? “I have a no green Blood Thirsty almost to max level. Once it gets to max, I’ll wait for Dragonflight.”

Good luck with that Blood Thirsty Xaya and congratulations once again on Xayanawa becoming our 51st Shadowlands Iron Man champion!