Xaya chose to level Xayathauda as an Iron because he is on a quest to get one of every class to max level as an Iron challenger.

When we asked Xaya about what leveling path he chose for his Mage Xayathauda he had this to say: “I used Chromie Time to 50, but since iron mages have a hard time killing mobs at 30 I started to avoid combat as much as possible. At 50 I used BfA chests to get to 51 before going through the Maw. For Shadowlands, I carefully scouted which quests, bonus objectives, and world quests were doable.” 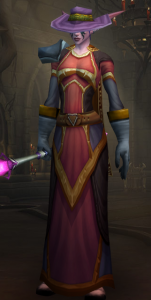 Xaya has the following advice for others thinking of trying the Iron Man Challenge: “Scouting is the key. Especially at high levels, many mobs just cannot be killed. Find out what you can kill and what will kill you.”

What’s next for Xaya? Will he be taking a break or is time to hop on the next challenger? “I still don’t have a champion for the following classes: Monk and shaman. I’ll eventually come to it but I also wanna do the covenant campaigns for all 4 covenants.”

We wish you the best of luck with your remaining Iron classes and congratulations on becoming our 28th Iron Man champion with Xayathauda!