Our challenges offer different rule sets to provide an expanded way to level, sometimes outside of conventional means. The Working Man Challenge is no different. It takes the questing aspect of some of the challenges and combines it with the professions aspect of the Pacifist Challenge. Due to this your leveling path can vary quite a bit from the other challenges.
“Working Man has a lot more ways to gain experience. As a Worgen, I went out of the starting area above level 20, so went to Duskwood (for some more Worgen rep there), while doing cooking/fishing dailies. After that, I was high level enough to go to Winterspring. At 60, went to Borean Tundra, did some Argent tournament, and got my spirit wolf from Stormpeaks. At 80 Jade Forest and Valley of the Four Winds dailies. I learned archeology at 90, and that can give a very good amount of xp since there are always many dig sites (and all give xp no matter what your level is). I did some Shadowmoon valley quests in the 90s and many WoD treasures. In Legion, I opened my class hall and did mostly quests in Highmountain and Val’Sharash (all with fishing/cooking dailies and arch). At 110, because of the boat bug, I started to do mostly archeology, until the trick to use the horde boat was discovered. After that, I did some quests in Tiragarde and some chests runs, all boosted by dailies and some archeology.”

Xaya’s most memorable close call had him convinced he’d be visiting the character creation screen. “In Legion, I opened my class hall by choosing the survival weapon while on the beastmaster spec so it wouldn’t auto equip. At some point I got so low on health I couldn’t see any green on my health bar. I didn’t die, obviously, but I was sure I’d have to reroll.”

Xaya’s advice to those who are thinking of trying out the Working Man Challenge: 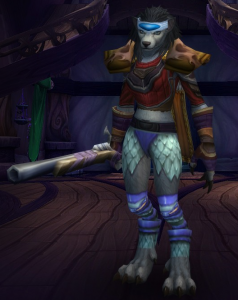 “Working Man has a lot of opportunities, use the dailies, professions to their maximum for faster leveling. The caveat is that it’ll take a lot more time to get from point A to point B because of all the nodes and herbs along the way.”

What’s next for Xaya? Is it time for a small break or is he jumping right back in? “I have a level 90 Pacifist and level 71 Blood Thirsty. I hope to get the Pacifist as close to 120 as possible before Shadowlands, but I doubt the BT has any chance to make it.”

We wish you the best of luck with your other challengers Xaya and once again congratulations on becoming our 6th Battle for Azeroth Working Man Challenge champion!