Xayabingra was created as a Dwarf Hunter. “I chose a Hunter because I know the class well as a challenger. Race was random”

Xaya used the following strategy to level Xayabingra: “I decided to use all scouting map (so no exploration XP) and no Chromie Time (so no rares above 30ish). When rares in Loch Modan, Swamp of Sorrows, and Winterspring stopped giving decent XP, went to Azsuna up to low forties, then Tiragarde Sound. After 50, I killed mobs in Bastion up to 55, then Ardenweald, and Rivendreth at 58.”

Were there any close calls while leveling Xayabingra? “At 58 in Rivendreth, I was fighting a mob with a patrol nearby. I misplaced my freeze trap so the patrol came after my toon and not my pet. I hoped to kill the first mob and use the pet against the patrol afterward, but finally had to use Feign Death when my screen started to flash.” 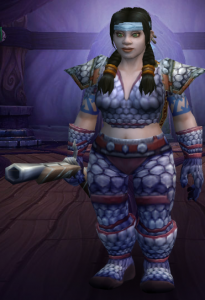 Challenge: “Know your class well, learn what you can (and can’t) kill, and always have an escape route.”

Will Xaya be taking a break or will he be moving on to the next challenger? “I’m gonna wait till Dragonflight goes live to start again on my Shadowlands champions.”

Enjoy your break Xaya! We’ll be looking forward to your Dragonflight challenge adventures and congratulations once again on Xayabingra becoming our 17th Shadowlands Blood Thirsty champion.