Congratulations to Pacijang on becoming our 20th Battle for Azeroth Pacifist Challenge champion! It took Pacijang just over 46 days with a /played time of 4 days and 6 hours to reach max level.

Our first Pacifist contest saw a lot of challengers giving the Pacifist Challenge a try for the first time. “I first tried a paci during the Patiently Pacifist challenge.  When that toon was eaten by wolves in Nagrand at level 100, I immediately rolled this one and tried again.”

Everyone’s leveling path can be rather similar at times. However, we love to ask what path our challengers took to get to max level to see if they did anything a little differently. Jang took the following path to reach max: “I leveled from 1-60 doing the paci-safe quests I knew in EK and Kalimdor, while herbing and mining almost exclusively in Elwynn Forest using a familiar path. Between 60 and the low 90’s, there are many paci-friendly quests in Outland, Northrend, and Pandaria, plus prof dailies. From the low 90’s to low 100’s, I almost exclusively farmed Draenor treasures. Then I leveled the rest of the way using arch and prof dailies.”

What about close calls? Some challengers encounter several and others manage to have a smooth trip. “I never really had any close calls in terms of dying. I was more afraid of right-clicking on a critter. I could have disabled the right-click attack, but that seemed like it would be violating the spirit of the challenge.” 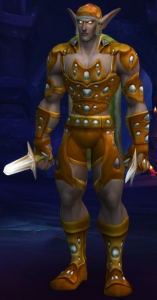 After reaching max level some of our challengers like to take a break. Others jump right back in on another character. Since we are currently awaiting the arrival of Shadowlands Jang has opted to work on a non-challenger for a bit. “I’m taking a break from challengers until the xpac and working on getting flight in BfA.”

Enjoy your break Jang! We hope to see you back at it once Shadowlands launches! Congratulations once again on reaching max level with Pacijang and becoming our 20th BfA Pacifist Challenge champion!