Congratulations to Frozensoul on becoming our 8th Shadowlands Blood Thirsty Challenge Champion! Frozensoul’s /played was 7 days, 14 hours, 59 minutes, and 42 seconds. Her real-world time stamp clocked in at 365 days, 23 hours, and 44 minutes. Bonus info: Her overall total kills (including any critters that may have gotten caught in the crossfire) came in at 10,337.

Frozensoul is Nisey’s 6th Blood Thirsty to hit max level this expansion. Her other Blood Thirsty challengers that have reached level 60 are Soulsnuffer, Soulshield, Soulstoned, Kneesee, and Soulsapped.
Nisey says of the Blood Thirsty Challenge, “This is just where I feel more comfortable. I have a hard time remembering what quests are the “safe ones” for Irons. While I could keep a list open and on standby, the questing challenges tend to stress me out. With the Blood Thirsty challenge I can just put on something to listen to, be it a podcast, live stream, or music, and just start slaughtering pixels until I needed a break. I’d much rather choose the mob that may kill me than a quest choosing it for me.”
Nisey mentions, “Frozensoul ended up as a Mage to replace a previous Mage that had met an unfortunate end when a disconnect occurred. I went with Frost as her spec for a couple of reasons. The first being the elemental helper you get in that spec. Granted it doesn’t do that much damage, but it can serve as a distraction while you try to make a getaway if things go south. The second reason was I had run Frost on the previous Blood Thirsty Mage and had pretty good success. The slowing effect from the frost spells can buy you some time, whether you are trying to kite a mob or just buy a few extra moments to finish them off before they do too much damage to you.” 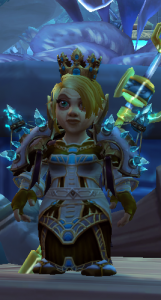 Nisey states, “This challenger joined the ranks right after the pre-Shadowlands level squish took place. I was a bit too nervous to take out any of my older/higher level challengers yet, so I used Frozensoul to try to find my footing in the new landscape we were now facing. She basically became my post level squish zone tester. I started out following my previous leveling paths through Loch Modan, Feralas, and Winterspring, but ultimately I ended up in Tirigarde Sound and leveled along the road from Hatherford up to Foxhollow Woods. It was a fairly safe leveling path there, even if my grinding loops were a bit on the short side. Plus I felt that I was making a bit more gold on the vendor trash dropping from the mobs out there than I had been following.”
So did Nisey have any close calls while leveling this character? “I don’t remember having any specific close calls. Though I did remember hitting invisibility when I accidentally pulled two mobs in Bastion that like put a nasty Gore spell dot on you. I knew I wouldn’t survive that so I hit invis and ran.”
Nisey’s advice for budding Blood Thirsty enthusiasts is, “Settle in and pack your patient pants. This is not a challenge you can get through quickly. Rested xp will become your best friend and I highly recommend letting your challenger accumulate some. I know a lot of us say this but it is really an important point to drive home: scouting is key. Scout everything you are unsure of. Lastly, don’t forget to ask your fellow challengers if you are unsure about something as well. The WoW Challenges Discord and website forums can put you in touch with lots of other challengers. There is a wealth of knowledge that can be gained from those who have dinged before you!”

So what’s next for Nisey? “A break is coming “soon” but not just yet. I am currently on a mission to get one of every class to max level as a Blood Thirsty challenger. I have 6 classes to go. I am also working on leveling up my Pacifist Priest, Gentlesoul.”

Best of luck on your Shadowlands Challenge leveling mission Nisey.  Congratulations again on becoming our 8th Shadowlands Blood Thirsty Champion with Frozensoul!
Cancel
In order to add your character you must meet these criteria: